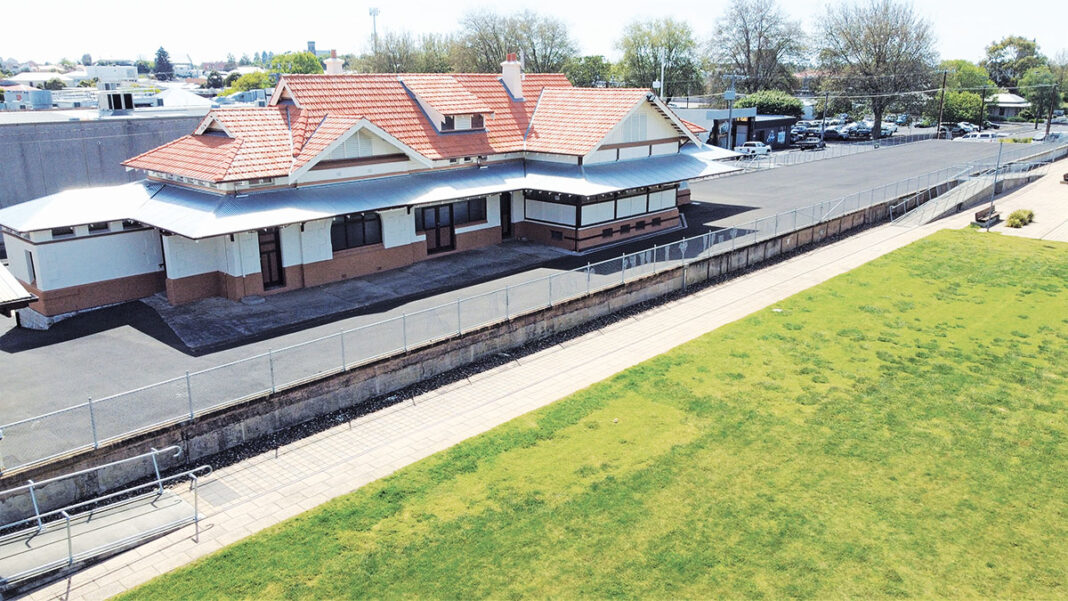 The City of Mount Gambier is now inviting commercial enquiries from suitably positioned applicants for the tenancy of the Mount Gambier Railway Station Building.

Raised on an platform promenade with direct line of sight across green open parkland from Bay Road, the Railway Station Building is the central meeting point the Rail Trail – 12km of pedestrian and cycling trail, connecting the eastern and western areas of the city.

“The unique tenancy opportunity is incredibly well positioned, particularly considering its connection to the CBD and the Wulanda Recreation and Convention Centre currently under construction, which will significantly enhance the surrounding precinct,” City of Mount Gambier General Manager City and Community Growth Tim Coote said.

The building is the last remaining restorative piece within Council’s progressive redevelopment of the award-winning Railway Lands, which has gradually transformed the unused inner-city corridor into a high-quality community asset.

“This is an important location in the further strategic activation of this area and it’s clear the community has strong aspirations that its future use builds on the success of the Railway Lands as a vibrant and engaging inner-city public space,” Mr Coote said.

Recent restoration works have returned the local heritage building to its former glory creating a unique opportunity for its reactivation as a jewel in the crown of the Mount Gambier Railway Lands precinct, with further updates set to be completed this year.

“Since its establishment in 1918, the Railway Station Building has played an important role in the development of Mount Gambier and holds a special place in the hearts of many in our local community,” Mr Coote said.

Final stages of the building restoration will soon be under way incorporating refurbished public toilets, ventilation systems, and the installation of a commercial-grade grease trap.

“Restorative works have focused on preparing the building to a point that allows for a range of activation options to be explored with prospective tenants.”

“The nature of the building allows considerable flexibility in the internal fit out and further internal works have been paused to allow for alignment with the needs and interests of the appropriate occupant,” Mr Coote said.

In addition to the 450m2 building footprint, the surrounding platform provides direct level access to over 1200m2 of raised fenced area with a large multi-purpose character shelter and access to power and water.

It’s expected the successful tenant of the Station Building will embrace the opportunities the area presents and incorporate its use and ongoing activation into a sustainable proposal for the site City and Community Growth General Manager Tim Coote said.

“The capacity of the platform area as an activation space has been tested through a range of pop-up activity over previous years and it’s clear there’s an exciting opportunity for its creative use in extending on the commercial capacity of the station building itself,” Mr Coote said.

In seeking a sustainable commercial outcome for the site, initial applications are invited from operators with demonstrated capacity to harness its unique potential.

Applicants are required to reflect on the strategic role of the site within the Mount Gambier CBD and consider Council’s endorsed CBD Guiding Principles as part of their proposal.

“Due to its significance, this is clearly not a typical property rental and prospective tenants will need to pitch a well-considered concept and match this with demonstrated capacity to deliver a sustainable activation which further enhances the area for years to come,” Mr Coote said.

More information about the Mount Gambier Railway Station Build and the application process can be found at www.mountgambier.sa.gov.au/stationbuilding

Teams fight to remain in hunt