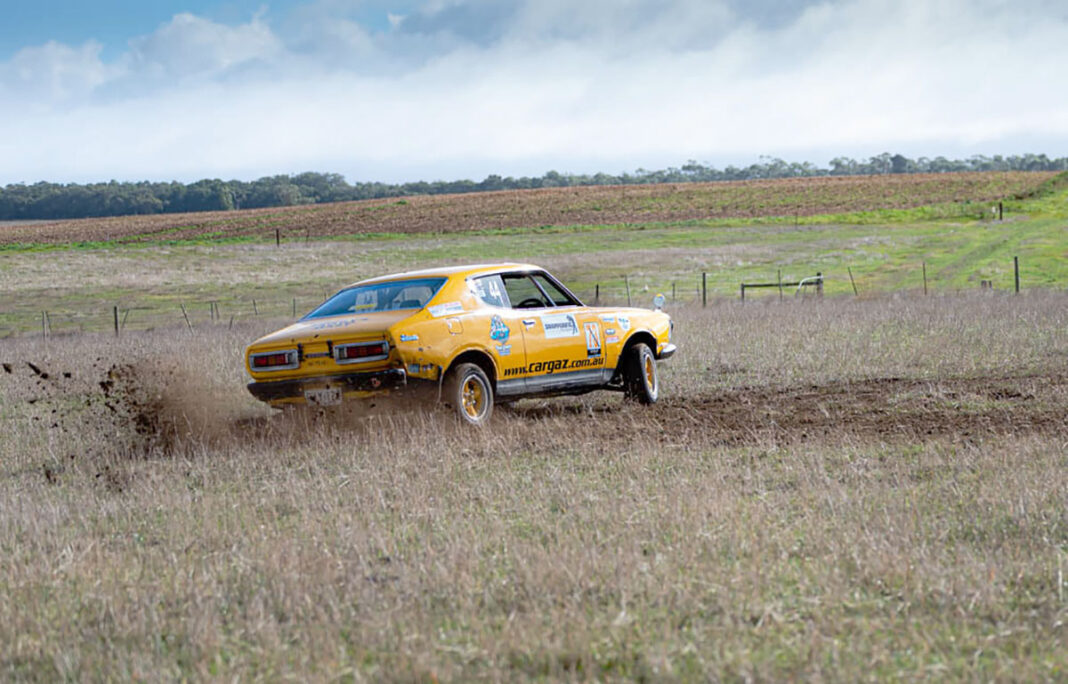 Drivers have blast at Burrungule

Being that SEAC is able to run its own “series” raw times are listed and added up to give the results for outright fastest and a handicap system is used to “offset” the different car sizes for handicap scoring.

Throw in some rain on the grassy track and the results are somewhat of a lottery, but there were huge smiles on all faces after the last test had been done and all packed up.

Under the guidance of Novice Director Leon Chugg, a total of eight tests were set out and run twice.

A disappointingly small entry of 12 competitors were given what could only be described as a day of motorkhana’s on Steroids.

Ken Trimnell was the quickest out of the blocks in his Suzuki Swift (30.14) closely followed by Ashton Slotegraaf’s Ford Laser (31.14).

Trimnell improved by almost two seconds on his next run to hold off Slotegraaf as they developed a rivalry before the former once again topped the field on the next layout titled Enterprise.

The track started to dry and Damien Wilson enjoyed the improved grip level to be quickest in the next run with a 42.47, holding off a big charge from Phil Wilson.

The next layout had some reversing action included to sort the drivers out and Slotegraaf set the pace with a 69.35 from Jason Sims.

In Reverse 2, Sims rose to the challenge with a mere 14 second improvement, while Max Virtanen (83.05) also improved by 50 seconds in his first motorkhana.

Another “massaged” test titled Top Hat included a garage for a direction change, turned out to be a bit of a challenge for some as cars missed turn points and scored a dreaded WD.

Trimnell again set the pace with a tidy 59.33 to head Geoff Wilson and Sims.

Sims led the pack home on the second attempt before the fifth layout was tackled.

With some downhill moist grass to contend with, some did better than others and Damian Wilson put his Silvia into competition mode and showed a bit of flair to head the list with 41.58.

On the second run novice junior, Ollie Pohlner put it all together for fastest time of 41.14 from Slotegraaf and Sims.

Test six was titled “Fly Eyes” and kept the drivers busy on the wide layout, with plenty of input at the steering wheel.

Sims has taken to Motorkhana driving like a duck to water and clocked a 51.01 for this layout to top the time sheet, with Trimnell a close second, but he got the better of his rival on the second attempt.

A driver’s favourite, Spiro Slalom on its side proved to be quite an enjoyable drive and a challenge to some.

Sims showed the pack how to do it and drove the family Celica well to the quickest time of 57.71, while Wilson lost his way.

In the Second Blast, Josh Munn put in an excellent run in the Datsun 180B SSS, with his 53.89 second run an improvement of 11 seconds on the first attempt.

The last charge for the day, Big Eyes, caused more than a few to get lost on the many “turn left at this cone” twists.

Munn, showed some style in the SSS Datto and put it all together for quickest time of 83.73 seconds, followed closely by Pohlner.

With the first run as a “sighter” most bettered their first times, but none could match Phil Wilson made it look easy in the big Soarer and stopped the clock at 82.58 seconds.

He was closely followed by Damien Wilson’s 83.37, while Pohlner was again quick.

With all tests done and dusted, course markers packed away, the scores reflected what a lottery a motorkhana can be when conditions change through the day especially when run on a grass or dirt layout.

No one went home disappointed after tackling the directors choice of “new” tests that had been lengthened to use the extra ground available.

When scores are all added, penalties applied and some checks are done, the outright scores reflect consistency with Sims getting number one spot with his total of 884.81 seconds.

He was closely followed by Trimnell’s 895.55 seconds for second place, while Phil Wilson had a mixed day to complete the podium.

When the Handicap system is applied for variations to vehicle wheelbase, Sims held onto number one from Phil Wilson and Trimnell.

Millicent on the march against improved Cats