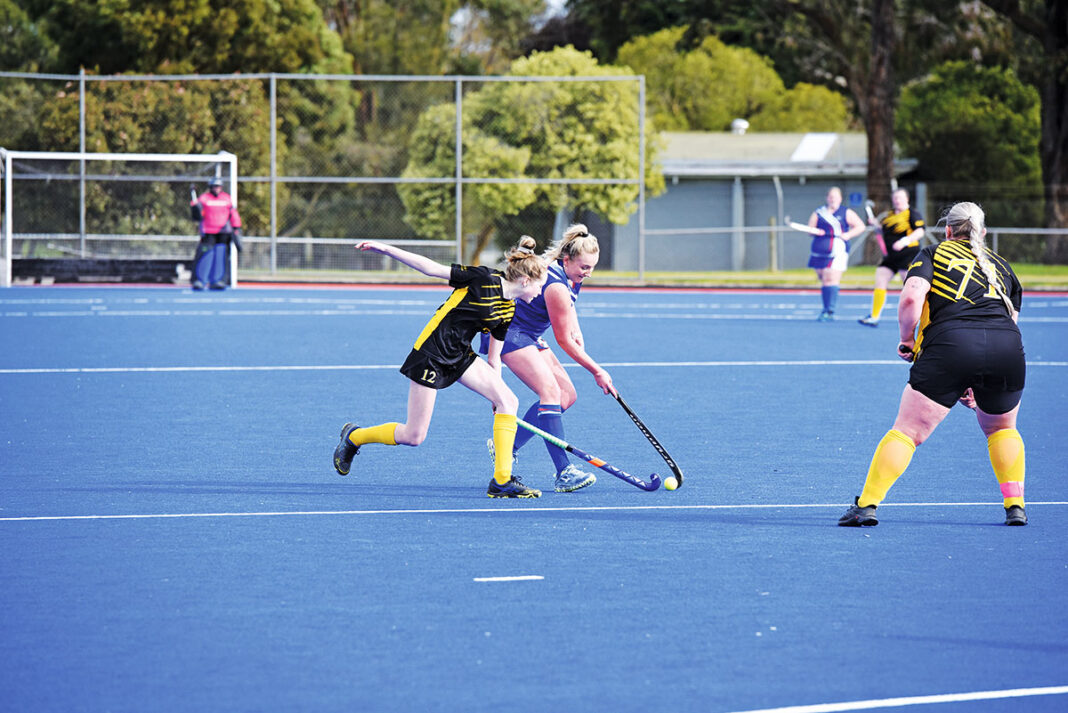 Division 1 men Tigers 2 was forced to use a range of players from their senior stocks to fill key absences in their Lower South East Hockey Association Division 1 men’s clash against West last weekend.

Additions brought a little bit of extra spark and ultimately led to an early goal by Tim Boxall scoring a cross from Jesse Hewett.

After the initial goal, West kicked into gear and used their press to block the play in their attacking 50.

West’s attacking effort led to a Chris Calliss goal via a short corner.

West kept attacking through Angus Aitken and Buzz Brennan, but fortunately for Tigers, keeper Harry Robinson and denied many chances.

But West managed to gain the lead through a Gavin Robertson back stick and immediately extended it to 3-1 by Jack Leishman who one-touched a cross past the keeper.

Tigers keeper Robinson continued to deny countless attempts until the end with the game finishing 3-1 win in West’s favour.

Cavaliers 2 had to take on the task of facing league leaders Tigers on Saturday evening.

The Cavs have been in some fine form, but when walking across the field to commence play, they could have been confused for arriving at the wrong timeslot, with five Division 3 players playing as a result of injuries.

Cavaliers full back Shaun Fabian and goalkeeper Anto Baseley defended as much as they could, but Tigers went into the half time huddle with a five-goal lead.

Through Connor Bartlett, Tigers kept earning penalty corners and Cavaliers could not stop the onslaught.

The scoreboard kept turning over, but luckily for opposition Tiger Brady Cooper was not having his most accurate game, and missed a lot of easy goals.

Once it was all done the premiership favourites defeated Cavaliers convincingly, with Aaron Mengler scoring four and Cavaliers not having a lot to be excited about.

Division 1 women In the women’s competition Redbacks met Tigers in the Division 1 match of the day.

After an uncharacteristic loss 5-1 in their last encounter, Redbacks were keen to come out and make amends.

Tigers started the game strongly, earning a penalty stroke early which Kaitlyn Nisbet scored to the right of the keeper.

Redbacks had numerous opportunities to enter the circle and score but could not get a goal on the board.

After a hard fought passage of play Tigers eventually scored a penalty corner to take a two-nil lead.

Redbacks responded a few minutes later with a goal through Zara Blackwell.

Blackwell then scored with a reverse stick shot shortly after to even up the score-line.

A turnover 10 minutes in to the second half by Redbacks resulted in a quick run forward by Tigers which helped them seize the lead.

The action did not stop there after only a couple of minutes later, Redbacks was able to equalise through a rebound from Eliza Beck.

An ineffective clearance from Redbacks gave Tigers a fourth goal through Abbey Hood, and the lead going in the final quarter.

Redbacks continued to struggle at the start of the last quarter with their decision making, causing turnovers which gave Tigers opportunities to score.

However, Redbacks hit back at the five-minute mark of the final quarter.

Some strong fight from Blackwell resulted in a loose ball in the circle which was scored by Steph Wighton.

The goal against the run of play meant the sides had to settle for an entertaining 4-4 draw.

Starting strongly West scored first from a turnover and did not look back against Riddoch Strikers.

Strikers’ goalkeeper, Kate Fabian was a clear standout for the match and saved many goals but could not stop the deficit to eventually start building.

Strikers found better connection with each other through the midfield and stopped West from scoring regularly in the second half.

But standout contributions from Dana Jones, Angela Broad and Ashleigh Dunn allowed West to cruise to a 9-0 win.