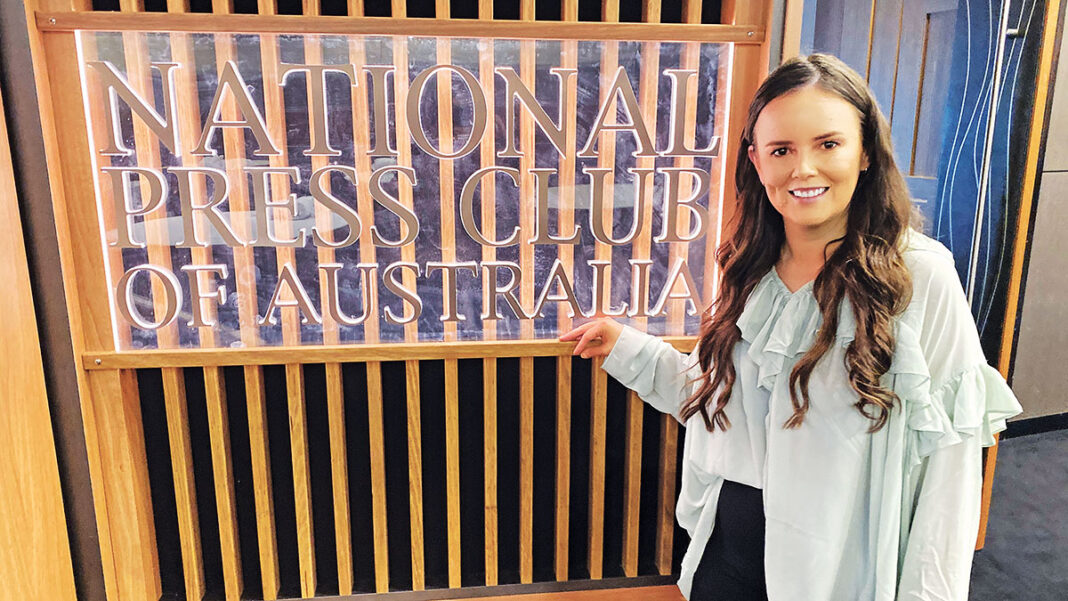 Within the space of a decade Brooke Littlewood has gone from being a cadet print journalist in Mount Gambier and her hometown of Millicent to being the guest-of-honour at a dinner at the National Press Club in Canberra.

The recent dinner was arranged by Women In Media as Ms Littlewood was this year’s winner of the Caroline Jones prize for being the Outstanding Young Female Journalist.

As part of her week in Canberra, she shadowed some talented photographers and journalists including The Canberra Times chief of photography Karleen Minney and the ABC’s Louise Willis and Lucy Barbour.

“I had the honour of asking the first question at the National Press Club weekly televised address, “Ms Littlewood said.

“The guest speaker was Aminata Conteh-Biger who is a remarkable woman, author, inspirational speaker and former refugee-turned-founder and CEO of the Aminata Maternal Foundation.

‘I could not believe so much time and effort had gone toward organising things like this for me.

“I left Canberra with renewed enthusiasm, feeling motivated and inspired for what lies ahead in my career.”

It was unfortunate that her time in the national capital came only a few days after the death at the age of 84 of Ms Jones who was a trail-blazing female figure in the media.

“I was absolutely devastated and heartbroken by the news of Caroline,” Ms Littlewood said.

“She was a remarkable journalist, friend and human.

“She always showed an interest in what I was doing whether it was in both work and life.

“We kept in contact via email, so even though I did not personally meet her I still got to know her.

“I remember on one occasion I was feeling under pressure, so she organised for Anita Jacobi to give me a call and offer some advice and guidance on how to manage stress.

“I could not believe anyone would do that for me.

“Caroline said to me: ‘Remember to have confidence in your outstanding ability’.

“Whenever I’m in doubt, I’ll remind myself of her kind words.

“She paved the way for generations of women in media.

“An inspiring and generous mentor, her legacy will live on forever.”

As well as journalism at newspapers in three states, Ms Littlewood has spent her 20s working in hospitality in places as diverse as London in Great Britain to Eucla on the Nullarbor Plain.

For the past three years, she has been based in Perth and written for “Farm Weekly”.

“I am an agricultural reporter and my main news round is livestock,” Ms Littlewood said.

“I feel so grateful that people trust me to share their stories and always hope I can give them the justice they deserve.

“Livestock is such a diverse round – there’s more to it than sheep and cows.

“I love getting out on the road, listening to farmers discuss how and why they do certain things in their programs, changes they have made over time, what’s worked, what has not – basically everything.

“As my manager said: farmers want to read about issues that affect them, as well as stories on what other farmers are doing.”

“I am one of 12 members on the Butterfly Foundation’s inaugural Lived Experience Community Insights Group,” she said.

“Members are advocates for positive change in eating disorder treatment and care.

“We are invited to undertake professional development and training opportunities, further developing their advocacy, policy, leadership, and storytelling skills.”

Ms Littlewood is committed to her media career choice.

“Now I’m going to continue to learn, grow and love what I do, while working towards becoming the best journalist I can,” she said.

“There’s a lot going on at the moment and it’s best to take each day as it comes.

“You never know what opportunities lie ahead, so I just want to be prepared knowing that.

“At the end of the day though – if I’m doing what I love and sharing people’s stories then I am happy.

“I really cannot thank everyone enough for their support.

“It does not go unnoticed and I would not be here today without it.”

‘Emotional call’ made over memorial plaque