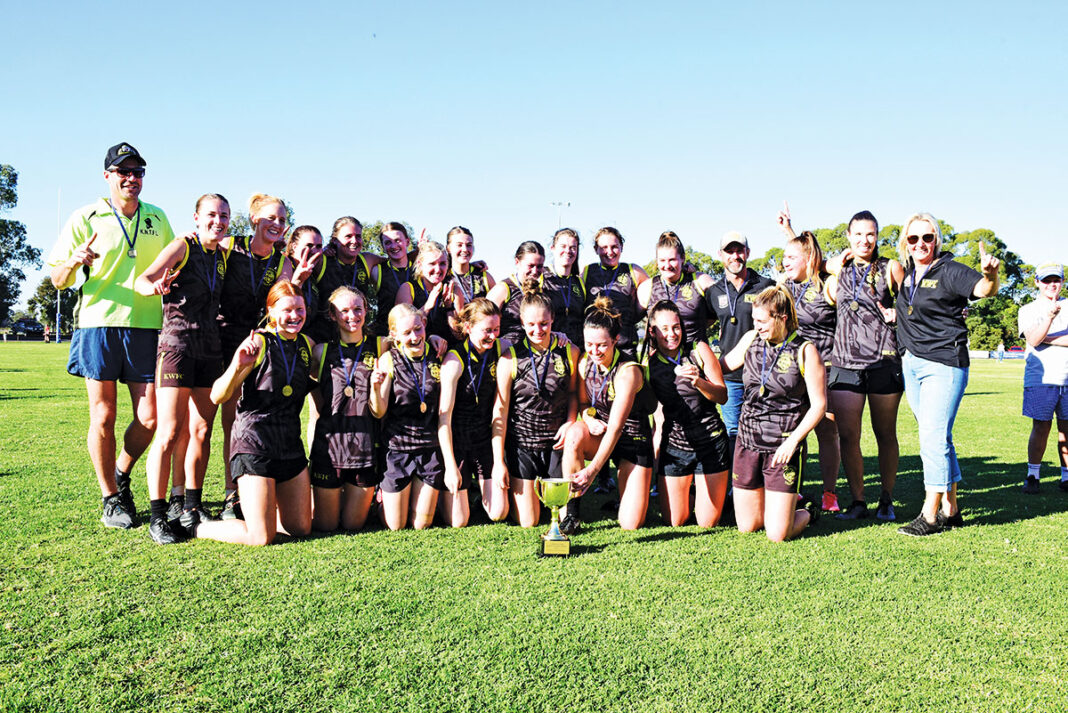 Kybybolite has stunned everyone by taming South Gambier in a boil over for the ages in the 2022 Limestone Coast Women’s Football League grand final on Sunday.

All eyes were on Penola’s McCorquindale Park where the top two sides in met to battle out for the right to be the premiers for 2022.

Enjoying an unbeaten run since 2019 including last year’s grand final against Kybybolite, one had to be brave to tip against South which had been the class team all season.

However, in an unexpected turn up it was the Kyby Tigers that lifted the premiership cup for season 2022 and for the first time in five years.

Kybybolite coach Luke Crossling has been there throughout the entire journey and lost his voice after the game.

“It was a cumulation of five years of hard work, blood sweat and tears,” he said.

“But we finally have it.”

All hype was around the Demons as they were the undefeated side in the minor rounds and were classed as the favorite to go back-to-back with a full strength lineup led by co-captains Kendell Saffin and Melanie Bateman.

However, Kyby was a team on a mission and right from the start of play the Tigers were up and about.

It started in the middle from co-captain Dellie Brown who made the first contest a hard ball get and suddenly the black and yellow were away.

All over the ground Kyby matched the Demons with play and the Tigers’ backline was all class repelling everything that came its way.

The battles right across the whole ground were won by the Tigers and it was clear the coaching staff had done their homework on how to nullify the Demons in play.

To the South side’s credit they also had some good patches of play.

Leader of the engine room Tess Andrews looked dangerous when she started to get the ball and tried to bring her side into the game.

But her efforts were in vein as South was scoreless at the first change with Kyby opening up a two-goal lead.

As the game went on the Tigers found their accuracy as their confidence built minute by minute after controlling each passage of play.

The trend continued in the second half with the hard efforts of Andrews, Lauren Frost, Bateman, Saffin and Lilly Walker only resulting in three behinds for the Demons.

The usually dominant red and white found themselves in the unfamiliar position of being dictated with Kybybolite putting on relentless pressure right through the whole game.

The Tigers held the Demons goalless for entire game and did it with an across-the-board team effort with strong pressure from the backline.

The win from the Tigers was attributed by best on ground performance from Georgia Gill, who enjoyed strong support from Ella Jones, Dellie Brown, Susannah Maber and Tyler Atkinson.

Della Hannaford continued to be a dominant force in front of the goals booting three majors, while Alice Edmonds and Sophie Ford also found the big sticks.

The big day of action kicked off with Group B grand final action between Casterton Sandford and North Gambier in what was another one-sided affair.

The Cats were not in any trouble right from the start of play and that was due to the Victorians being super in all departments.

The run and carry all started from league runner up best and fairest Scarlett Jarrad, who stood tall along with Zhane Crawford and Chloe Finnigan and a six-goal haul from Alissa Humphries.

The big day of action wrapped up the biggest and one of the most successful seasons of Limestone Coast women’s football.