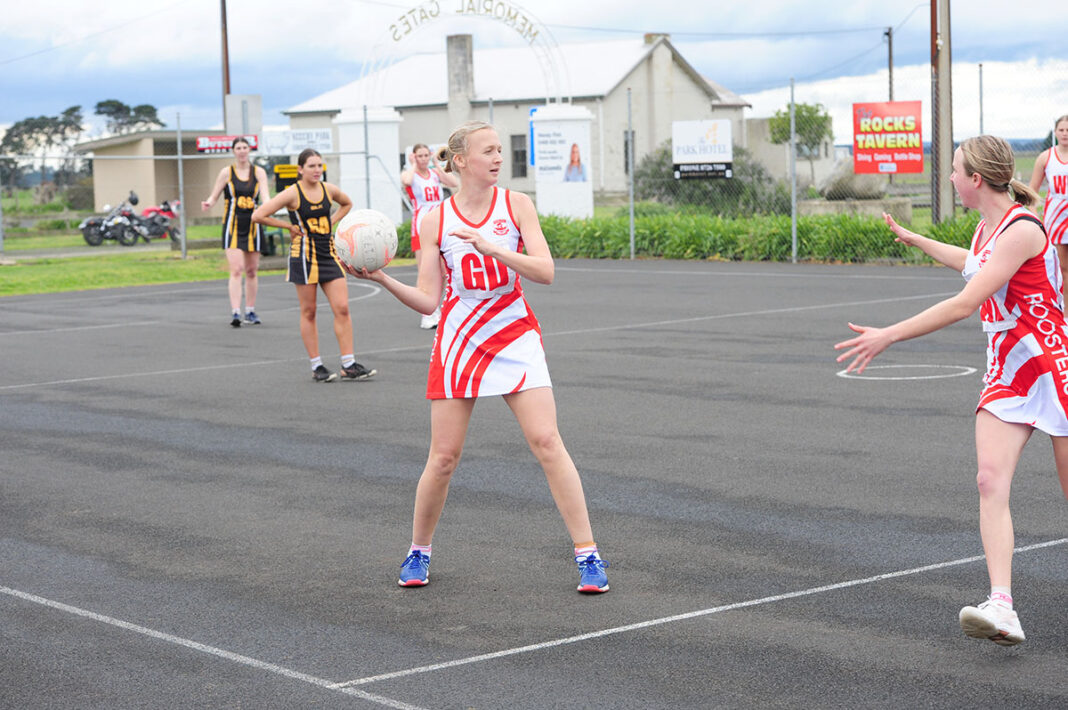 Roosters crow away from home

Kongorong hosted a quality Robe outfit at home for Round 14 of the 2022 Mid South Eastern Netball Association with the aim to step up its attack towards the pointy end of the season.

The Roosters got off to a great start to shoot the first couple goals unanswered with Ellen Ramke performing from get-go.

This meant the Hawks defence of Riley Buckingham, Emily Lightbody and Sarah Lucas took a while to adjust to Robe’s quick ball movement.

With Kongorong slightly unsettled the Roosters were able to capitalise through an accuratte Georgia Perkins and Sarah Laurie to give the away side an eight-goal lead.

The respective defensive line-ups gave it a good crack across the court as Perkins and Buckingham battled hard in the circle, both being influential for their sides in the second term.

The Hawks settled in the second quarter with Evie Sealey and Tilah Buckingham able to look after the ball, but Robe remained composed and enjoyed a 12-goal lead at the main break.

Laurie was Robe’s focal point as she shot 11 out of 13 goals for the third term while Ramke and Emma Grant were also pivotal.

Despite the young Hawks improving game and attempt to limit the damage on the scoreboard, Robe was the more polished side and its speed and accuracy ultimately led to a 57-31 victory.

The Kalangadoo and Mount Burr battle was the main attraction for the round as the Mozzies looked to climb higher on the ladder to secure a top four spot heading into finals.

Both teams started the game strong with pressure and high work-rate from all players.

Laura Schultz made her mark on the game for the Mozzies, reading the play well to feed her goalies accurately as both teams entered the break locked at 11 goals each.

Mozzies’ goal shooter Ebony Clark had a solid quarter, missing only two goals from her 11 attempts to help them snag a one-goal lead at the main break.

Mount Burr brought fresh legs intto the game in the third quarter through Leila Buhlmann while Kalangadoo used the opportunity to move Gentile into the defensive circle.

These changes prompted Kalangadoo’s defenders to step up their intensity, forcing errors from Mount Burr’s attack to help Kalangadoo turn around the margin and lead by five at the final break.

The Mozzies brought Zoe Brown to goal attack to replace Buhlmann and switched the wings.

The final term was played at a high intensity with Mount Burr’s Schultz and Maddie Gamble finding space to feed their goalies with precision.

Madi Haggett continued to work hard on Kalangadoo’s Abbey Duncan who was positioning well for her feeders and combined with Collins to convert accurately.

With the Magpies’ defensive pressure and experience they were able to gain a hard-earned win and stay top of the ladder.

Glencoe took on Tantanoola in an important clash for both sides.

The Tigers tight defence enabled them to score the first two goals of the game before Glencoe hit the scoreboard.

The Murphies then switched on the jets with Donna Jaeschke taking control through the midcourt to set up easy access to her goalies from the circle edge.

Tight defensive pressure from Chloe Pfitzner and Sarah Edwards down court created a flurry of intercepts while Emma Gould was the focal point of the Tigers attack and her battle with Chantelle Cocks was highly contested.

The firing defensive pressure from Glencoe set up a nine goal advantage heading into the first break.

The Tigers re-jigged their entire attack line in an attempt to disrupt the Murphies’ run and had an immediate impact on the game with the safe hands of Walker through the middle.

But the Murphies defensive duo of Sarah Edwards and Cocks found their feet again to shut down any space in the Tigers goal circle.

At the other end Glencoe’s Markiewicz used her speed to find front space and finished with accuracy, netting 16 of 17 attempts for the quarter.

A commanding effort from the Murphies was reflected on the scoreboard as they scored 21 goals to nine for the term.

Glencoe continued to push the Tigers, with their full court defensive pressure not allowing them an inch and the high intensity applied during the game was too much for the Tigers with the final score 72-45.

Port MacDonnell faced Nangwarry on home turf on Saturday and both injury depleted teams fought for every opportunity.

Under 17 Lara Wilson thrived under the guidance of experienced goalie Toni Gilmore and gained many opportunities around the ring.

But with limited rebound opportunities they struggled to find turnovers as Cassie Dinnison ‘had her eye in’ and did not miss.

Through the middle, Hayley Burner fought on Brooke Williams and the two had a great tussle.

Port MacDonnell utilised all rebounding opportunities which helped them increase the lead to double figures through the second and third terms.

The Demons pushed out the final quarter looking to increase its lead and gain percentage while Nangwarry focussed on creating turnovers where possible.

Young Port MacDonnelll player Wilson played an amazing game and took over shooting in the final quarter to cement the 17-goal win.

Business leaders get together