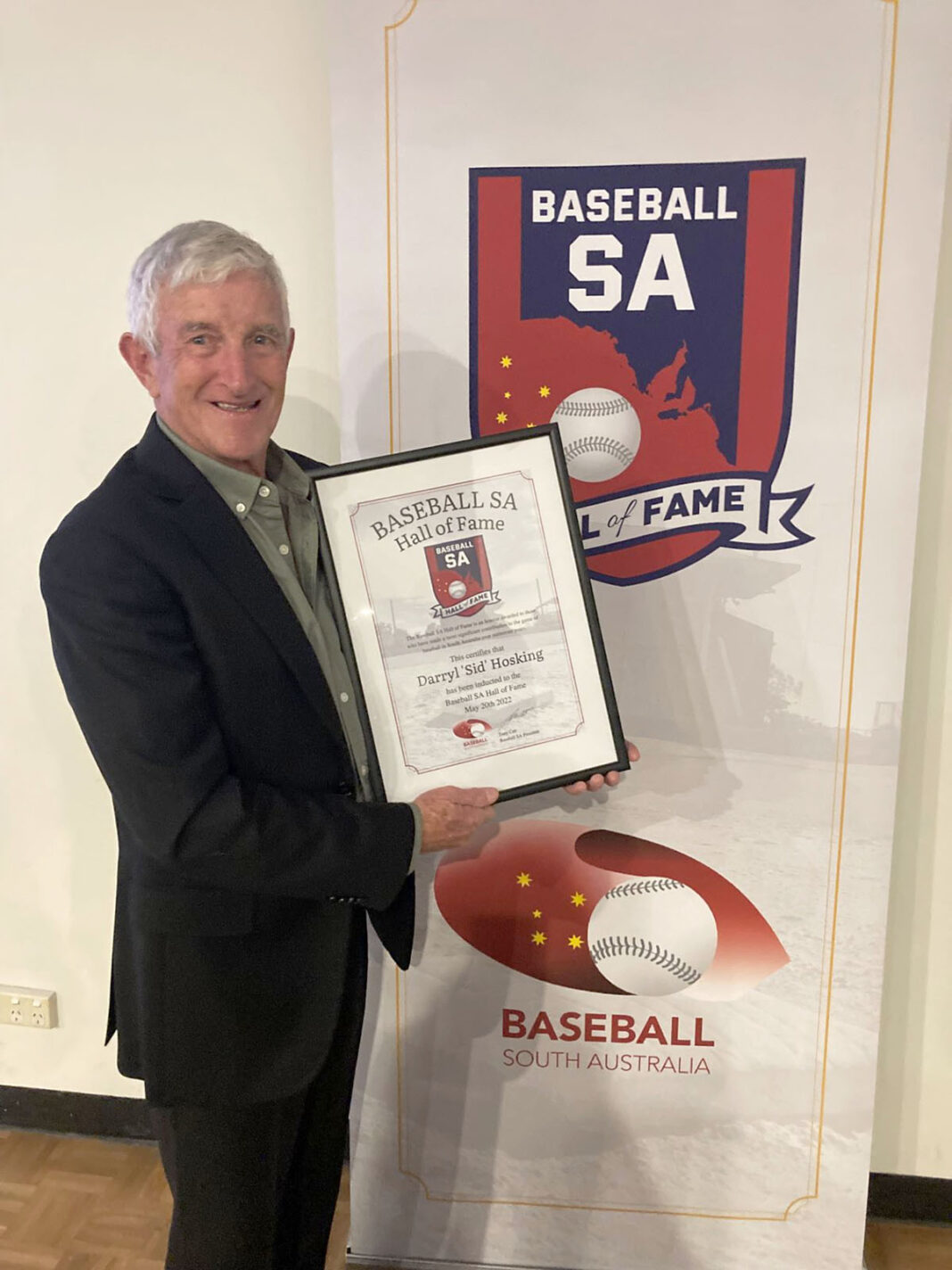 One of the greatest servants to Limestone Coast sport, Darryl “Sid” Hosking (pictured) was inducted into the Baseball SA Hall of Fame last week.

Hosking’s greatest love and passion outside his family was baseball and playing rounders at school sparked the interest.

His sporting career started in 1960 when the Victorian Provincial Baseball Championships were held in Mount Gambier when the local association decided to start a junior league due to strong participation.

After completing a practice day with around 100 Under 14 junior baseballers, Hosking was placed in second division team the Pirates.

He does not remember too much about those early days, but he did remember the first mitt his parents bought for him was actually a first base mitt.

The Pirates moved up to Division 1 in 1961 and “Sid” played in his first of many grand finals against Yankees losing 17-2.

But in the same year Hosking was selected in his first Mount Gambier representative team for an Under 14 series against Adelaide.

One standout memory from juniors – and not a good one – was hitting Graham Greenwood in the head with the ball while he was batting.

In 1961, Robert Wilson asked “Sid” to join him at the Central Baseball Club which at the time was starting a C Grade team and the rest is history.

Hosking loved the game but was really only a “very average player” and in one game alone he made six errors but reckons he made up for it in the 1980’s when he batted 5 for 5.

He played his first A Grade game at age 18 and went on to play many more in the top division. He hung mostly around second base and did some pitching through the grades, but his fast ball was not much faster than his slow ball which was really a gravity drop but confused a lot of batters and won quite a few games over the years.

In all Hosking played over 700 games with Centrals, playing in seven premierships including one with his two sons.

His first VPBL juniors representative game was in 1964 in Dandenong, at the same time the Beatles came to Melbourne and someone in an upstairs floor of the team hotel waved a mop out of the window and the crowd went wild thinking it was one of the Beatles shaking their head.

Hosking has also served three stints as Central’s treasurer, president and been the club coach twice.

He currently has 45 scrapbooks about baseball in Mount Gambier and is now working on the period from 1955 to 1980 and is currently editor of the club’s end of year magazine.

Hosking has been around for 60 of Central’s 90-year existence and is still involved currently as a scorer for Division 3 after being awarded Life Membership in 1977.

In the late 1960’s he joined the board of the Mount Gambier and District Baseball League serving twice as president in the seventies, but has been the treasurer for 23 years.

In the 1983/84 season he took over the mantle of statistician and after 38 years relinquished the position at the end of last season.

“Sid”was heavily involved with the transition from winter to summer baseball in 1980 with the move to permanent facilities at Blue Lake Sports Park and has played big roles in many tournaments including the MGDBL and SA Championship.

At a national level he was on the organising committee of several tournaments held in Mount Gambier highlighted by the ABL visit in 1998 and the 75th anniversary of the Claxton Shield between South Australia and Victoria.

Hosking did all the research behind two of the league’s biggest recent achievements in the clubrooms and light towers.

“Sid” has been around the local baseball scene for two thirds of its existence and received the Australian Sports Medal for his contribution to the sport by the Prime Minister John Howard in 2000.

His baseball has been fully supported by wife Jill who did a lot of scoring over the years and children Brett, Tim and Jo which he thanks them most graciously for.

In fact, the day in 1979 that Jo was born Sid had to make a decision if he stayed at the hospital or played the upcoming game.

Well, baseball was the winner, not really a hard decision with the approval of a very supportive and loving wife.

For those who wish to celebrate Hosking’s remarkable life in baseball and this tremendous achievement, a show dedicated to “Sid” will be held at the MGDBL clubrooms at Blue Lake Sports Park from 2pm on Sunday, June 5.