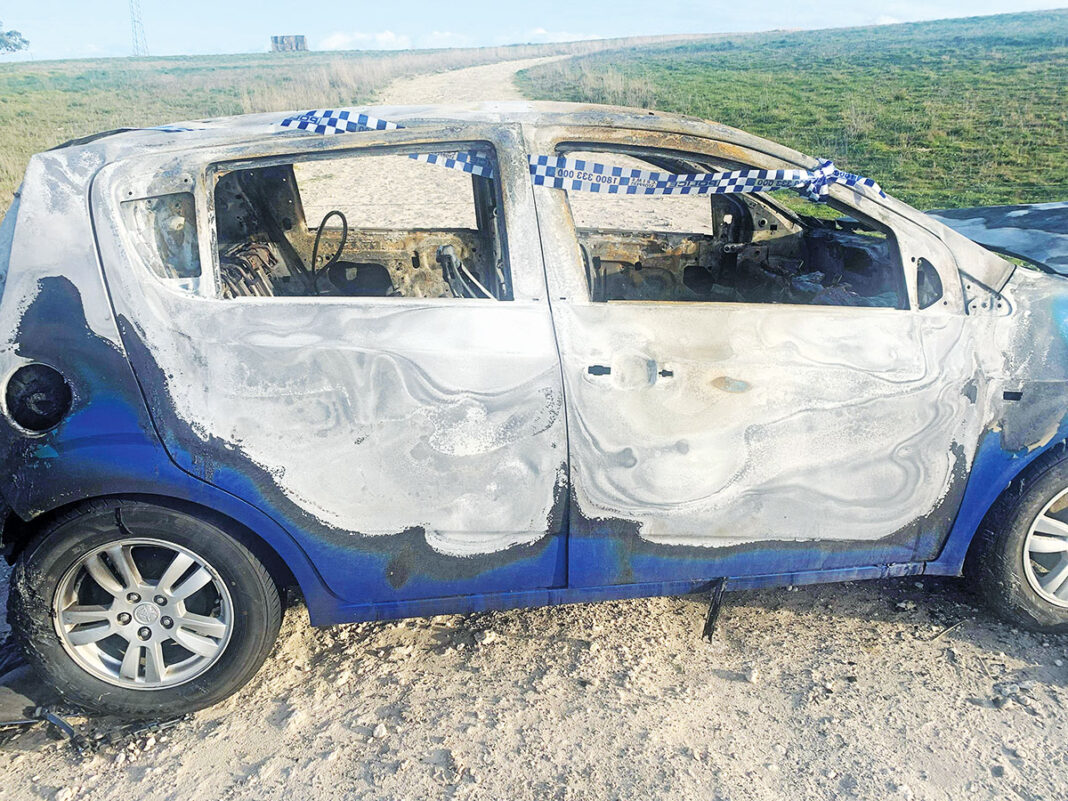 AMount Gambier woman recently had her car stolen from her driveway in broad daylight and burnt out.
Single mother Jodi Battye said her car was found severely burnt on Sycamore Road, nothing could be saved from the vehicle and no forensics could be recovered.

Ms Battye said she was “distraught” and “shocked” and said she used her car to drive her son with congenital myasthenia syndrome to Adelaide for medical appointments.

Ms Battye said her car was parked in her back driveway behind a fence and her keys were on the back verandah table when she hung out a load of washing.

She went for an hour and a half mid-morning nap with her son and when they woke up her keys and car were gone.

“So somebody’s obviously, I do not know if they were watching, but it was broad daylight, I have got neighbours everywhere,” she said.

“My house keys and everything were on my car keys, it was not just a single car key.

“I have never had anything taken before, the house has not been broken into.

“I can understand if it got stolen from a carpark or something, but from your own driveway, it blew me away, I just could not comprehend it.”

“That’s been the first thing that I have actually got the loan in my own name, not a partner or anything and I have paid for it myself,” she said.

“It was a real kick in the guts for me.”

Ms Battye said she had only lived in her Wehl Street North rental property for a couple of months and said it was all a bit daunting and lots of traffic passed through the area.

“I just could not believe it had happened in the middle of the morning, I was just dumbfounded,” she said.

“There was a baby seat in the back too, like my son’s car seat, I’m thinking, the nerve of people.

“I’m a single mum, and they see the car seat in the back and is that, like, am I now an easy target?”

She said she had been able to borrow an old car, however she needed a more reliable vehicle to transport her son to and from medical appointments every three months.

“I’m not one to rely on people for things either, I’m pretty independent, and I think that’s what I’m struggling with the most, I have to ask for help,” she said.

Ms Battye said one of her work colleagues had created a GoFundMe page to try and help towards purchasing a new car.

“I have tried to ask for a loan but I have been knocked back because the high rent that I’m paying and the living expenditure’s so high,” she said.

“So it’s just going to be a trying few months I think, just trying to save as much as I can and wait for the little bit of insurance to come in and hopefully the GoFundMe page picks up a little bit more traction and just helps us out a little bit.

“I have had so many scenarios going through my head, it’s been insane, just trying to put pieces of the puzzle together and just figure it out.

“There’s a lot of heartless people out there that’s for sure.”

Anyone with further information can contact Crime Stoppers on 1800 333 000 and donate to the GoFundMe via gofund.me/cb8c3905

Youngsters line up against state talent