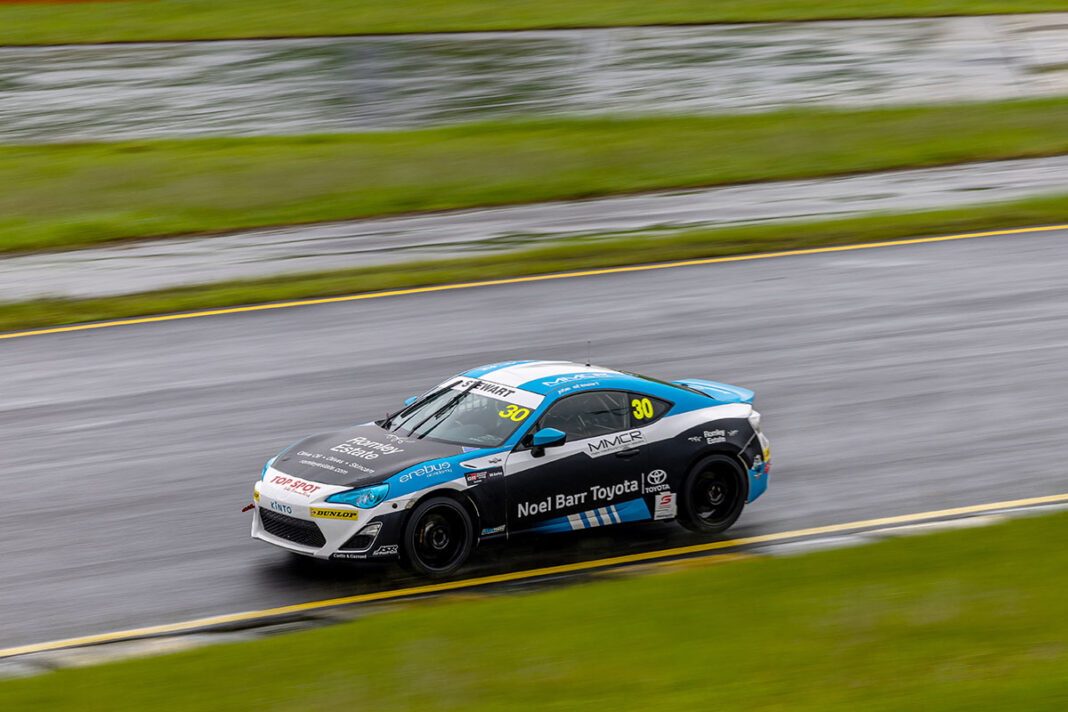 After mastering a slippery Sydney Motorsport Park and collecting podiums in the season opener, Stewart sat third in the championship and was hopeful of establishing himself as a front-runner at a familiar location.

Due to the season finale on the streets of Newcastle looking unlikely, the single-make championship made a last-minute trek to Mount Panorama to support the return of the Liqui Moly Bathurst 12 Hour.

Despite making his fourth trip to the famous mountain, Stewart did not find top gear straight away as mixed conditions caused some headaches.

Having been greeted by wet weather and gloomy skies, Stewart and his small team rolled the dice on a wet setup, but missed the window which left them on the back foot for qualifying when the sun came out from behind the clouds.

In a competitive qualifying session, the Erebus Academy driver was able to put his JSR machine in fifth position – three tenths behind poleman Zach Bates.

Stewart said he was pretty comfortable with the one-lap pace and car setup despite battling the mixed conditions and limited track time.

“We went for a wet setup because the track was pretty wet at the start of practice, but it was almost fully dry by the end of it,” he said.

“We did not have much time to change it, but knew which way to go for all conditions so we were still pretty confident heading into qualifying.

“Fifth was not too bad, but it could have been better.”

What would become a feature of his weekend, Stewart enjoyed a lighting start and jumped up to third, but could not maintain his grip on the podium place by the time the chequered flag fell after a one-lap sprint to the end following a safety car interruption.

The youngster took home a respectable fourth which put him in a good position to fight for trophies on a busy Saturday.

Another fast start allowed Stewart to slot into position three instantly in race two which gave him the belief to attack full time Erebus Motorsport Supercars star and former Toyota 86 champion Will Brown with a breathtaking move down the inside of Griffins Bend.

Unfortunately, the teenager could not stop Lachlan Gibbons from taking second at The Chase, but said it was a great feeling rubbing shoulders with Brown.

“It is always cool racing the guys at the front and especially against Will,” Stewart said.

“It was super cool to race against him and talk about it afterwards because he races hard, but fair.”

In the third and final race for the weekend, Griffins Bend was not Stewart’s friend when he dropped from second to fifth after being hung out to dry.

This forced the youngster to dig deep and some big passes – including a brave manoeuvre at Reid Park – allowed his #30 car to steal an unexpected podium.

The double podium on Saturday vaulted Stewart into a strong second position in the championship standings with his consistency paying off as his rivals found the kitty litter.

Stewart said he had to fight to get those trophies, but feels there is still more to come as he chases that elusive win when the series heads to Townsville in July.

“I had to work really hard in both of those races because there was a five-car train for the lead at many stages, so it was tough to hold position,” he said.

“In the final race everyone bump drafted past me, but I then managed to claw my way back.

“I am pretty happy with how the season has gone so far, but there is always room for improvement in our small team and the main thing will be qualifying better.”