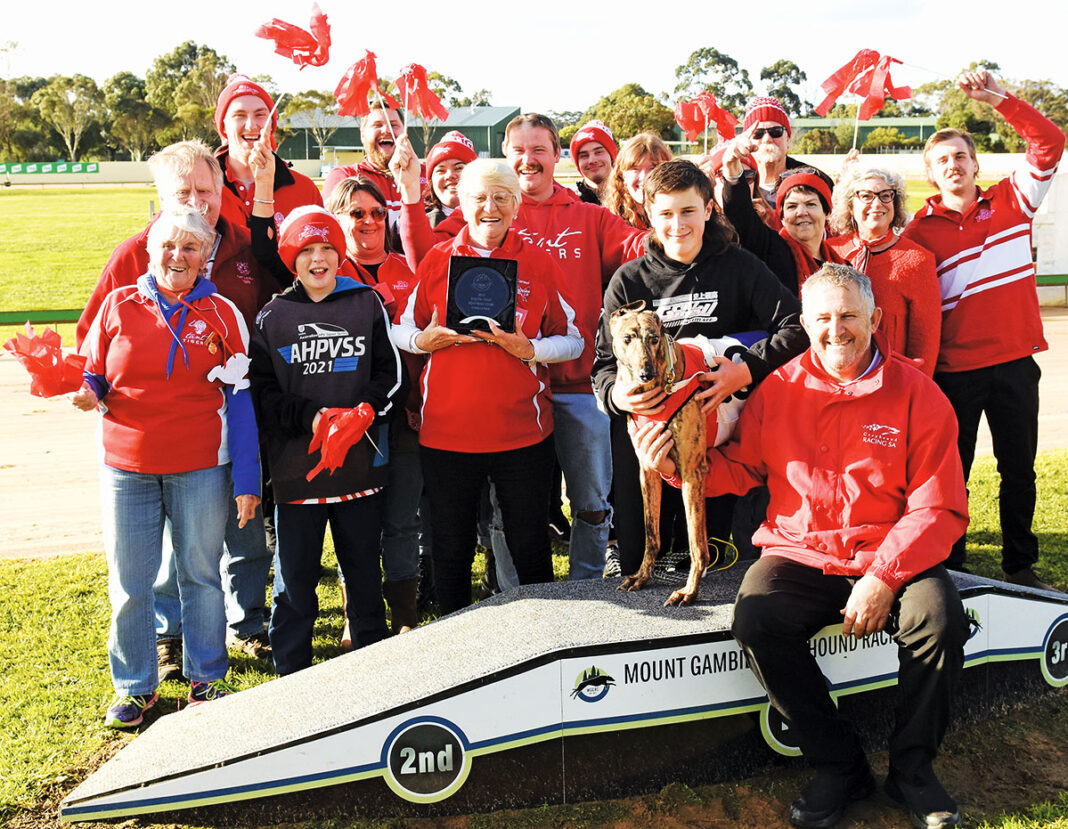 From a greyhound racing point of view, the highlight for the eight invited clubs was the running of the SE Football/Netball Clubs Challenge – eight greyhounds racing over 512 metres with the eight clubs all drawing a runner.

And taking the early lead from box six was Nangwarry’s representative, the $19 outsider Flatty Hunter.

Trained at Hamilton by Tony Harding, he’s no stranger to longshot winners after the dog had won at 100/1 earlier in the year at Murray Bridge.

Giving chase was Compulsory Hero, who gained a start as a reserve.

Trained at Two Wells by Clint Trengove, the brindle dog carried the hopes of the Tantanoola Tigers and somehow they managed to get the him over the line with 1¾ lengths to spare.

The Tantanoola Tigers certainly entered into the spirit of the day, coming dressed for the occasion and thoroughly delighted to have won the SE Clubs Challenge trophy with their representative.

Walsh’s superbly bred stayer was born for the caper

The death last week at 77 of long-time Koroit greyhound man Tom Walsh brought back memories of his terrific stayer Mystic Hope, a granddaughter of Hall Of Fame inductee Strand Belle.

Bred in the district by Barry Smith in early 1984, Mystic Hope certainly boasted beautiful bloodlines, being by Bowetzel out of Mystic Strand.

All told, she won 21 races, including the 1987 National Distance Championship at Olympic Park when trained by Len Ketelaar.

Tracing down the line of the Buka Sunset mating was a litter by Digital out of Courtney Sunset (Moonambel Prince x Mystic Sunset) which included a greyhound called Kirkstall Jane.

In early 2010 Kirkstall Jane found her way over to Glencoe where Barry Shepheard – these days a member of the Greyhound Racing SA stewards’ panel – took over the training of the white and black bitch.

A couple of months later Kirkstall Jane gave her trainer his biggest home-track success when defeating the Portland pair of Swarming and Drone in the Mount Gambier Cup final (512 metres) in a time of 30.20 seconds.

And through their involvement, Walsh’s two boys, Rob and Mick, continue to carry on the family greyhound tradition with Rob recently successful at Mount Gambier with Saint Prue.

Just what the doctor ordered

According to Terang trainer Mark Roberts, standing in at last Thursday’s Tara Raceway time-graded meeting for his son Christian, Dr. Jimmy was one of those greyhounds that no one really wanted.

“He’d been advertised for sale by the Doctors Kennels at Darriman after his first two runs, at Traralgon over 350 metres and 395 metres, had resulted in unplaced efforts,” Roberts said.

“We figured with a price tag of $1000 and being a January 2020 whelping he was probably worth a try.

“Even though his first three runs for us at Warrnambool and Mount Gambier were nothing special, we thought he was close to putting it altogether.”

And the son of Bernado and Dr Klaas certainly put it altogether in the Produce Store Maiden Stake (400 m) when leading all the way from box eight to defeat Rocky Cadillac by 10¾ lengths in a best of day time of 23.19 seconds.

Meanwhile, with the Mount Gambier Greyhound Racing Club looking to encourage further 512 metre racing at its Thursday meetings, the switch of the July heats and final Fast Forward from 400 metres to the longer journey seemed to work pretty well.

Two 512 metre heats were run at the previous meeting with the fastest six, irrespective of finishing position, advancing to the added money final last Thursday.

And it was Langhorne Creek trainer Tony Hinrichsen who collected the $1150 first prize after Barefoot Rebel led all the way from box one to defeat Tracie Price’s pair of Mepunga Gem and Pirate Gold in 29.96 seconds.

For Barefoot Rebel, who has now raced at Tara Raceway on three occasions, it was a case of the son of My Bro Fabio x Tarks Black Rose maintaining his unbeaten record at the track.