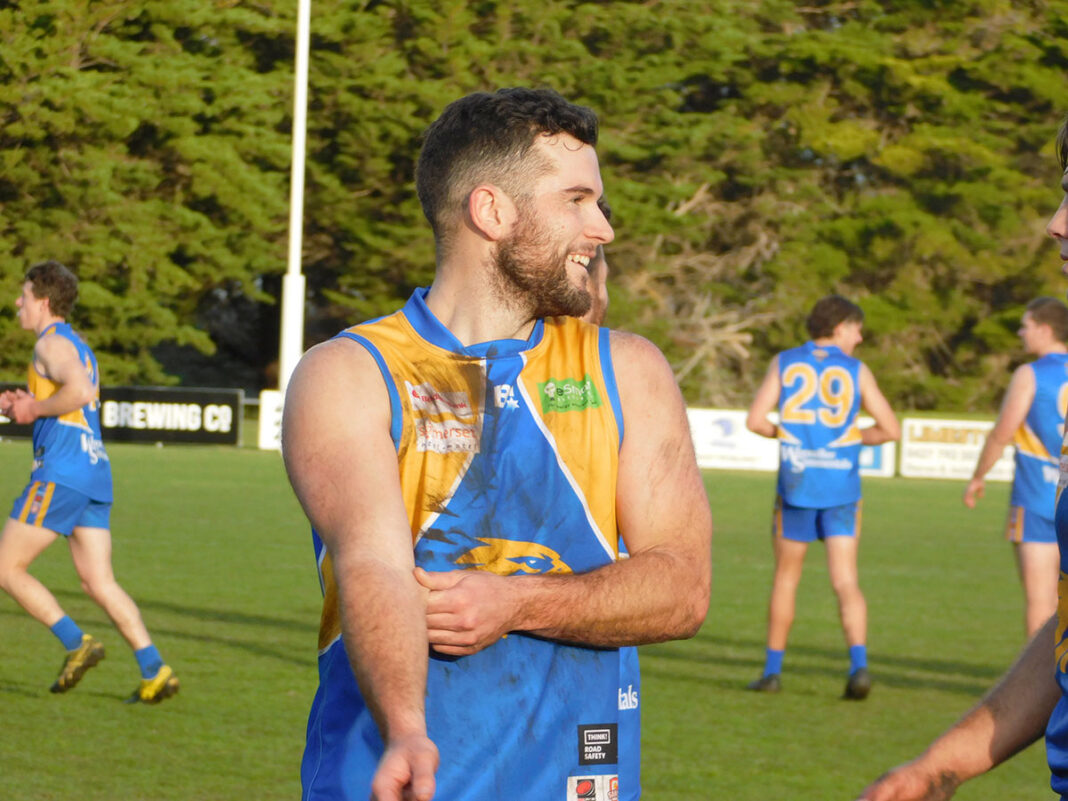 Ace Hatherleigh forward Sam Telfer achieved a remarkable personal best of 21.1 in his side’s 126-point thrashing of the Robe Roosters on Saturday in round 12 of the Mid South Eastern Football League.

It is the best individual performance by a Hatherleigh player since Craig Skeer kicked a club record 24 goals on this ground against Tarpeena on August 9, 1986.

Injury has restricted Telfer to just seven senior appearances in 2022 but Saturday was the game of his life for the former interleague representative.

He barely wasted a possession as his team cemented themselves into second place.

If you take Telfer’s solo effort out of the equation, it would have theoretically been a one-point win to the home side.

In truth, Hatherleigh had taken control by the mid-way mark of the opening term and seldom looked threatened thereafter.

One of the positives for the Roosters was the continued good form of Kaden Woodward who finished with six goals.

Robe had several first-choice players unavailable for selection and desperately needs its best possible 21 to line up in its home game against Glencoe on Saturday.

The Roosters are now sitting well outside the top four.

On the other hand, the percentage-booster has made the Eagles’ occupancy of second place more secure.

Hatherleigh heads to Tantanoola for round 13 and then has the luxury of a three-week break on account of the scheduled bye and then the SA Country Championships at Whyalla on July 16.

The much-anticipated replay at the Bay of the 2021 grand final proved to be a fizzer with ladder leader Kalangadoo easily accounting for third-placed Port MacDonnell to the tune of 91 points.

In a remarkable coincidence, this was the identical margin as to when these teams last met at Kalangadoo on Saturday, April 23.

As before, the Magpies scored with relative ease while the Demons had a great deal of trouble in threading the ball through the tall, white, upright sticks.

The black-and-whites are shortening the odds of securing the minor premiership while the red-and-blues are yet to secure a finals berth let alone a top two position and a double chance final.

Kalangadoo now has a three week break from play on account of the scheduled bye and the annual SA Country Championships.

Port MacDonnell will be looking to make amends on its annual trip on Saturday to Mick and Jean Walker Oval at Mount Burr.

The clash between Kongorong and Mount Burr looked evenly matched on paper, but it was a different story when the game got under way.

The Hawks should have been on a high with another senior colt making his debut in Declan Wright, but it was not the case.

The Mozzies have been the dark horse of the league in recent weeks and having taken some big scalps were out to make another statement.

Both sides endured various skill errors in the opening patch but Mount Burr was first to split the sticks through a Hamish Smith major, while key defender Sam Wallis made life hard for the Hawks despite a number of counter attacks

Kongorong put their first goal on the board halfway into the first quarter, but the Mozzies run and carry proved to be the nemesis for the flat footed opponents and led by 21 at the first break.

Mount Burr piled on four goals in the second term while the Hawks managed a mere two-points before regrouping at the main break to match the Mozzies style of play in the second half.

Wil Vickery, Corben O’Dea and Michael Waters were the backbone of the Hawks’ revolt but Mount Burr made the bigger scorerboard impact.

Thee Mozzies ‘big men up forward’ continued to cause headaches for Kongorong to run out with a percentage boosting 80-point with and make a statement of being a side to watch in the run to finals.

With the distinct possibility of a first-ever “wooden spoon” looming large, Glencoe brought its “A” game to its home ground encounter with bottom-side Nangwarry.

A loss would have consigned the Murphies to the same number of wins as the Saints and the possible lowest-ever ranking since the club was formed in 1910.

However, the home team looked sharp indeed and the magnitude of its 119-point victory helped to catapult it from eighth to sixth.

The Murphies took all of first term to get on target as their 11 scoring shots produced a solitary goal.

The margin was then a healthy 68-points by the second change and the Murphies increased it at every subsequent break.

As was the case at their first meeting on Saturday, April 23 when he won the Phil Muhovics Memorial Medal, Glencoe newcomer Henry Smith was a focal point in attack and finished with five goals.

Looking to round 13, Nangwarry hosts Kongorong while Glencoe heads to Robe.