Top football prize on the line

All roads lead to Penola’s McCorquindale Park this Sunday where a successful 2022 Limestone Coast Women’s Football League season will come to a dramatic end with not one, but two grand finals.

For the second year in a row South Gambier and Kybybolite will fight for the biggest prize in town, while Casterton Sandford and North Gambier kick off proceedings with the B Grade consolation decider.

The Demons have been the ladder and league leaders throughout the season and will come up against Kybybolite in a rematch of last year’s grand final.

South holds all the aces after winning both contests this year, plus taking home the 2021 silverware.

Kybybolite will be out for redemption from last year’s final after losing at home and will be eager to put in a solid four-quarter effort.

The Tigers are coming of a two-week break while South has had three weeks on the sidelines, so both sides will be fresh and ready to go.

In the Group A elimination final back on Sunday, April 3 – both sides matched up well and had each other’s measure.

But the might of the Demons took over after half time and the team won the game by 20 points to advance to another grand final.

South Gambier has a deep list of players and will look to its prime movers in Kendell Saffin, Tess Andrews, Alice Tentye and Lauren and Chelsea Frost.

Co-captain Saffin was under an injury cloud at the qualifying final, but has made the most of the three-week break to be primed for another big contest.

For the Kyby side there was disappointment but also another chance to play and advance to a grand final and extend a successful season.

The Kybybolite side will be led by captain Dellie Brown, while Tyler Atkinson, Georgia Gill and leading goal kicker Sophie Henschke are also expected to play big roles.

Henschke has been a dominant force all year kicking goal after goal, but has formed a strong relationship with fellow tall Atkinson, rotating across the forward line being key parts to Kyby’s long-kicking game.

This grand final will be an entertaining game of football and will display the skills and talent of the class sides of the region.

It will be interesting to see if South continues its reign or if Kybybolite can get revenge and claim the title.

In Group B grand final Casterton Sandford will come up against North Gambier.

With the Cats having not played for three weeks and the Tigers also not playing training would have been intense for both sides in the lead up to the big game.

Casterton Sandford is a good side with large skill and physical presence while the Tigers are also known to be the same so it will come down to a game of mental strength and the side that settles first and uses the ball well.

For the Cats to be outstanding they will look to league runner up best and fairest Scarlett Jarrad, while Sophie Arkun, Chloe Foster, Carlie Smith and Chloe Finnigan will also aim to push the Victorians over the line.

But they will have stiff opposition in the Tiger’s side from captain Lorelle Walker, Dana Jones, Chloe Perryman, Yenna Joyce and Luca Roulstone.

Casterton Sandford starts as the favourite after enjoying a comfortable 44-point win in the previous match up in round 2, but a lot has changed since then.

This first game will kick off proceedings at McCorquindale Park from 11.30am, while the big one between South and Kyby to start at 1.30pm.

So if you are looking for something to do on Sunday afternoon venture up to Penola and enjoy the spectacle of quality women’s football. 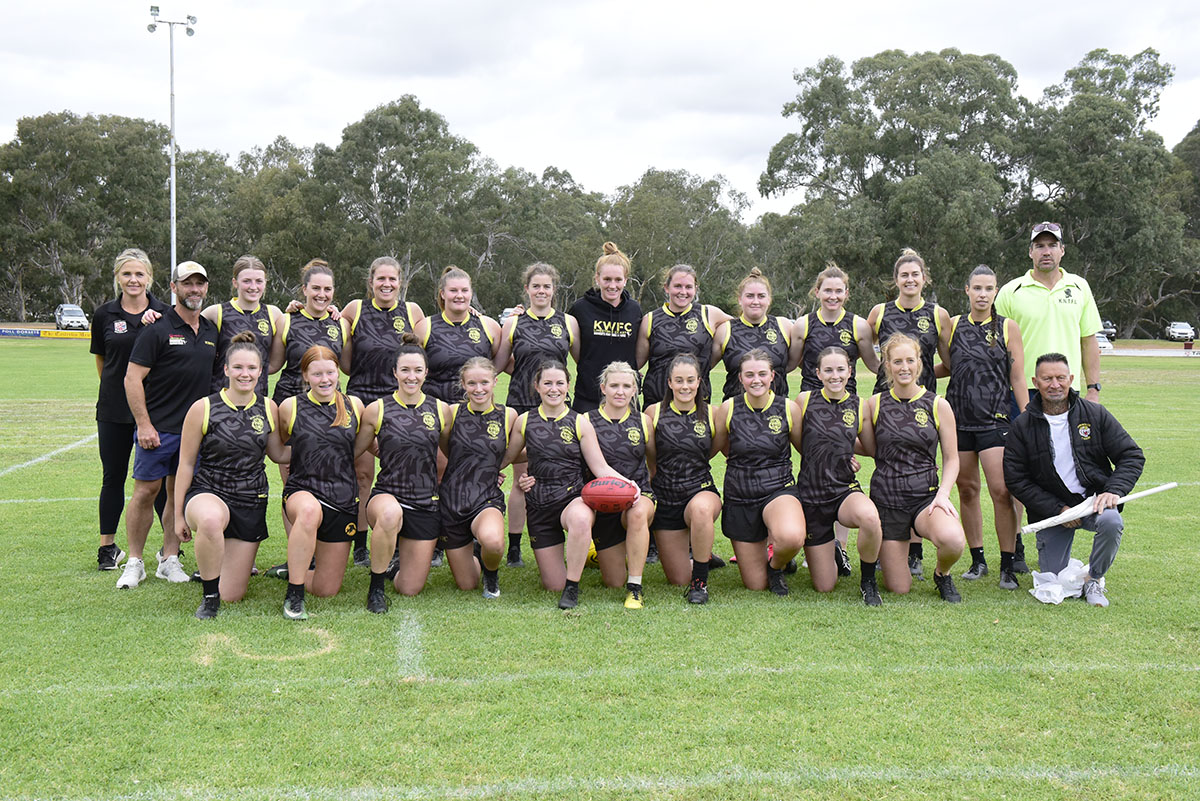 Kybybolite keen to get back on top

No women’s football team has enjoyed the long-term consistency of Kybybolite, yet it still has a point to prove.

Kyby has played and lost the previous two grand finals and will be hoping it is third time lucky this weekend.

The team is sick of being the bridesmaid, but the odds are against the yellow and black with the form guide suggesting another South Gambier win could be imminent.

But Kybybolite coach Luke Crossling said his team was in a good head space ahead of the season-defining afternoon.

“We are just excited to get there again and have another crack,” he said.

“It’s been business as usual and we have had some good training sessions and hopefully nothing happens COVID wise because we had three players pull out of the prelim final the day before.

“There has been a lot of hard work and sacrifices to get here, so hopefully we can play our best footy and see what happens.”

Although the Demons marched to another undefeated grand final berth, the only team to give the reigning premiers a fright was Kybybolite.

The Kyby girls were not afraid to make South earn every possession and the recent qualifying final was a tight battle with only inaccuracy in front of goal the difference on the scoreboard.

Despite facing a unit at the peak of its powers, Crossling said he was not worrying too much about the opposition.

“We are not worried it is South again because our game stands up against theirs,” he said.

“They are the benchmark of the competition and have some highly skilled players that function very well, but we had the same scoring shots last time and they just got a run on us in the second term.

“There is always pressure on both sides in a grand final.”

Over the course of the season Kybybolite has entrenched itself as the nearest challenger for South with hard, attacking football.

After a scrappy five-point win over Mundulla earlier in the season, Kyby showed its improvement in the preliminary final by smashing its nearest rival by 62 points.

Many of the usual suspects who have helped build the stronghold from day one remain, while the competitive Georgia Gill, Victoria Boddington and Ella Boston have made giant strides as first-year players.

The team’s biggest trump card is Sophie Henschke, who was the runaway leader on the competition goal-scoring charts booting 37 majors.

However, the formidable target up forward was restricted to just four goals in two games against the South backline and her output could be key to the result.

With only four quarters left of football, Crossling said his “family like” team would give it everything.

“There is no next week, so we might as well just leave it all out there,” he said.

“I think the best two sides of the year are going at it and which ever side can settle first and get the ball forward of the contest will win.

“We will risk it all and see what happens.

“If we play at our best there is a chance there, which is all you need.” 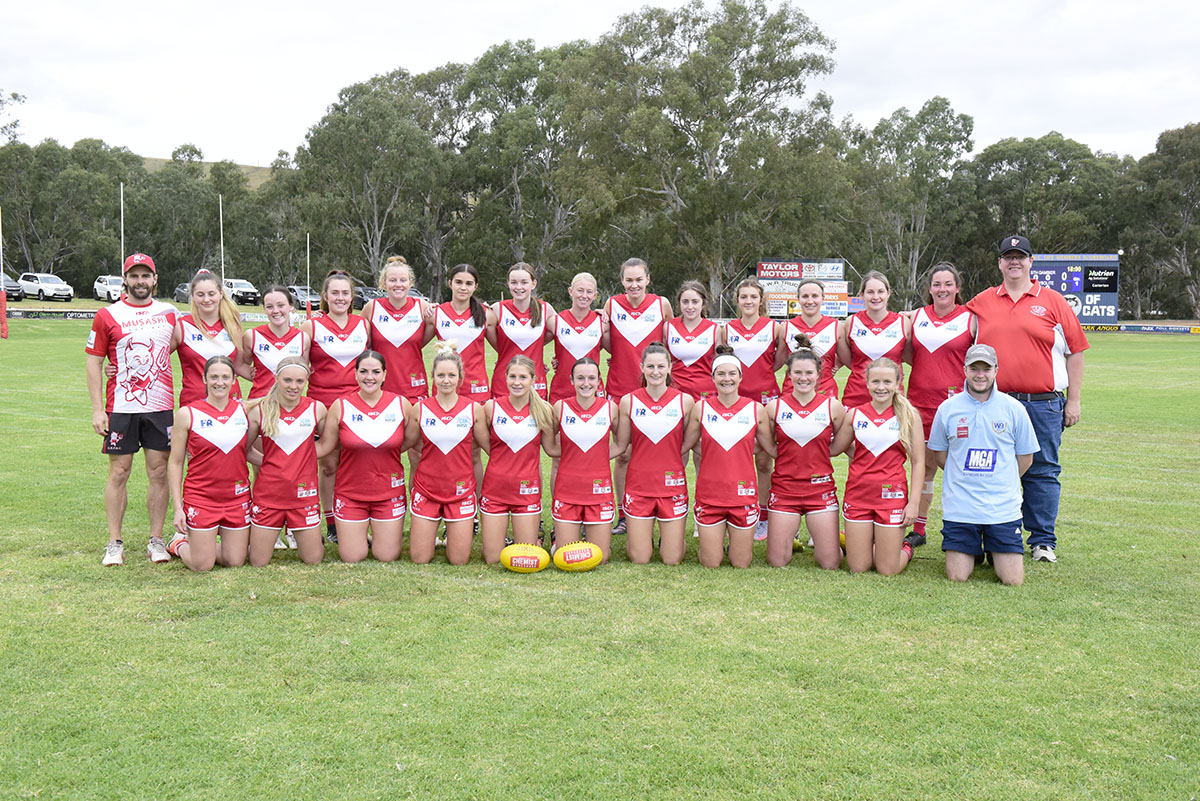 For the third straight home and away season, South Gambier has not lost a game and the queens of the Limestone Coast Women’s Football League aim to extend their reign on the throne this weekend.

The Demons enter the big one as the overwhelming favourites and will face Kybybolite just like they did 12 months ago.

These big names are hungry for more, but they will not be joined by 15 teammates from last year’s squad.

The Demons were forced to do a reset under the guidance Simon Radley and it has only made the team stronger.

Although South has not lost a game for 1149 days, Radley said the girls would not be complacent.

“The message I have been pushing home is great achievement to make it to the grand final undefeated, but we are in no better situation than Kyby because it all comes down to one game,” he said.

“I have been a member of grand final teams that have won all year and come up short in the big one, and that hurts for a long time.

“So I have kept telling the girls the premiership will not get handed to us.”

The Demons have met Kyby twice in 2022 and won comfortably on both occasions including the recent qualifying final.

However, Radley said Kybybolite well and truly left a bruising impression and his team must give it everything to win again.

“Kyby are going to be hungry and we know from two really tough games against them we will have to play at our best,” he said.

“It has taken full four-quarter efforts to get across the line and we had the same amount of scoring shots in our last encounter.

“They are the most physical and tallest team and we have to match their intensity.

“They are also the best contested mark team in the competition, so we have to be smart.

“We will have to use our leg speed to break the lines and avoid bombing the ball long.”

The Demons set the bar high early in 2022 and have carried the momentum throughout.

Radley admitted he was concerned the loss of Kaylene Nuske could have left a big hole in the back line, but co-captains Kendell Saffin and Melanie Bateman have inspired on and off the field.

There is depth all over the list with the likes of Lauren Frost and Alice Tentye also enjoying stand-out seasons.

South has a fully fit squad to choose from excluding Under 16 best and fairest Ella Guest, who is interstate.

After three weeks on the sidelines, the Demons have had plenty of time to think about the big game and Radley just wants his team to enjoy the moment.

“I said to the girls there is no point getting too anxious over the long three-week break, we play this game because its enjoyable, so soak it up and make the most of this experience,” he said.

“The last few weeks have been full of excitement and anticipation so the girls will be ready to roll.”