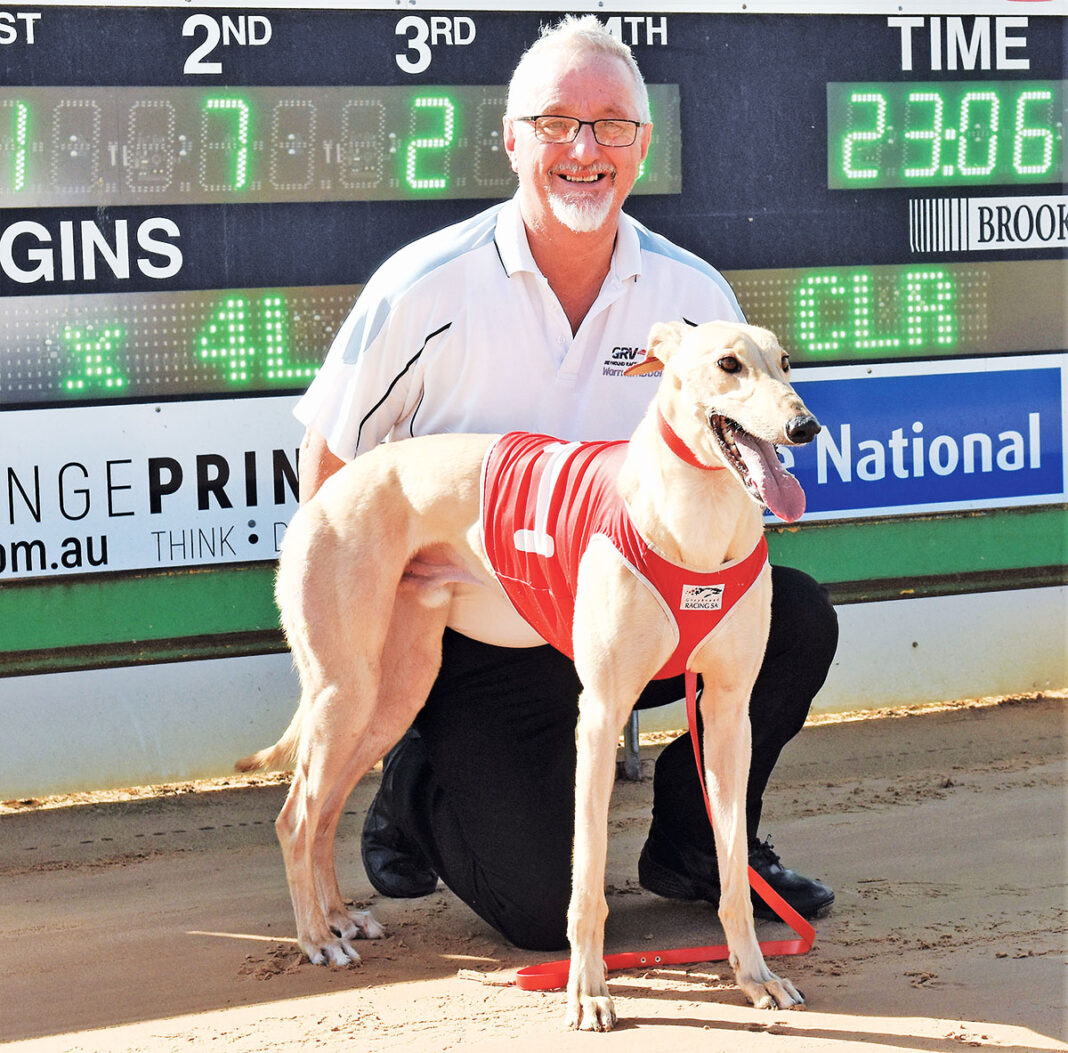 It fact it was back on August 16, 2017 that Franklin landed a running treble at a Wednesday afternoon time-graded meeting with McIvor Gordon, McIvor Patsy and Chuck McIvor – all members of the Bella Infrared x Blonde Caviar litter.

But his achievements have never been restricted solely to mid-week time-graded meetings.

He was actually listed on the back of that 2017 race program as the trainer of not one, but two track record holders on the same day – Mojito Mayhem (512 m) and McIvor Verna (600 m).

Mojito Mayhem, a son of Fear Zafonic x Graceful Amy, was a real cups king, winning the 2015 and 2016 Anniversary Cups at Tara Raceway.

Catching up with Franklin at last Thursday’s meeting was Haven trainer Jeff Guy whose $17 chance King Crow came from a fair way back to defeat Fleurieu Flyer (16/1) by a nose in the Rocks Tavern Stake (400 m) in 23.55 seconds.

Back in June 2017, Guy and Franklin had been involved in a remarkable month of track records at the Mount Gambier track.

Then, a week later, it was Franklin’s pair that lowered those records to 29.52 seconds and 34.84 seconds.

Currently, both records stand to the credit of the Tracie Price trained Giant’s Flash – 29.19 seconds and 34.69 seconds.

But back to Thursday afternoon and Impactus was most impressive when leading all the way in the Greg Martlew Autos Stake (400 m).

Away quickly from box one, the fawn dog defeated the Guy-trained Sanctioned by 6¼ lengths in a best of day 23.06 seconds.

Impactus joined Franklin’s kennels a couple of months ago as an unraced youngster after several previous trainers had moved him on, of the opinion that he was not up to city class.

He is raced by brothers Ali Zulfigar and Imran Arshad who purchased the son of Zambora Brockie and Tantalise (by Bella Infrared) as a pup.

“Impactus is the third dog I have had for them and he was one of the first they purchased.

“It’s probably fair to say they have put a fair amount into their first venture in Australian greyhound racing as they continue to look for a city dog.”

Franklin said one of the biggest problems with last Thursday’s winner was that he more often than not found trouble in his races.

“I trialled him at Tara Raceway in the lead-up to the race because he needs to see the track he’s going to race on.

“He certainly does get easily lost.”

Galactic Athena, winner of the 2019 Group Listed Mount Gambier Cup (512 metres), whelped her first litter – one dog and two bitches – earlier this month for Steve and Lee Bartholomew of Worrolong.

This is the 15th litter to be whelped in Australia by the US sire Blazin Wildfire who was possessed with chase, speed, strength and early pace.

From a breeding perspective, these Galactic Athena pups boast a bit of everything.

Blazin Wildfire is by Dragon Fire (a son of Australian greyhound Brett Lee whose statue was recently unveiled at Angle Park) out of the US-bred Tin Nee Ann.

Galactic Athena, bred at Moorak by Robert Chuck, is a daughter of Paddy Whacker, a sire who carries Canadian, US, Irish and Australian lines.

At only 20 months of age and lining up in the final at start number six, she ran down odds on favourite Slingshot Hammer to win in the time of 29.43 seconds.