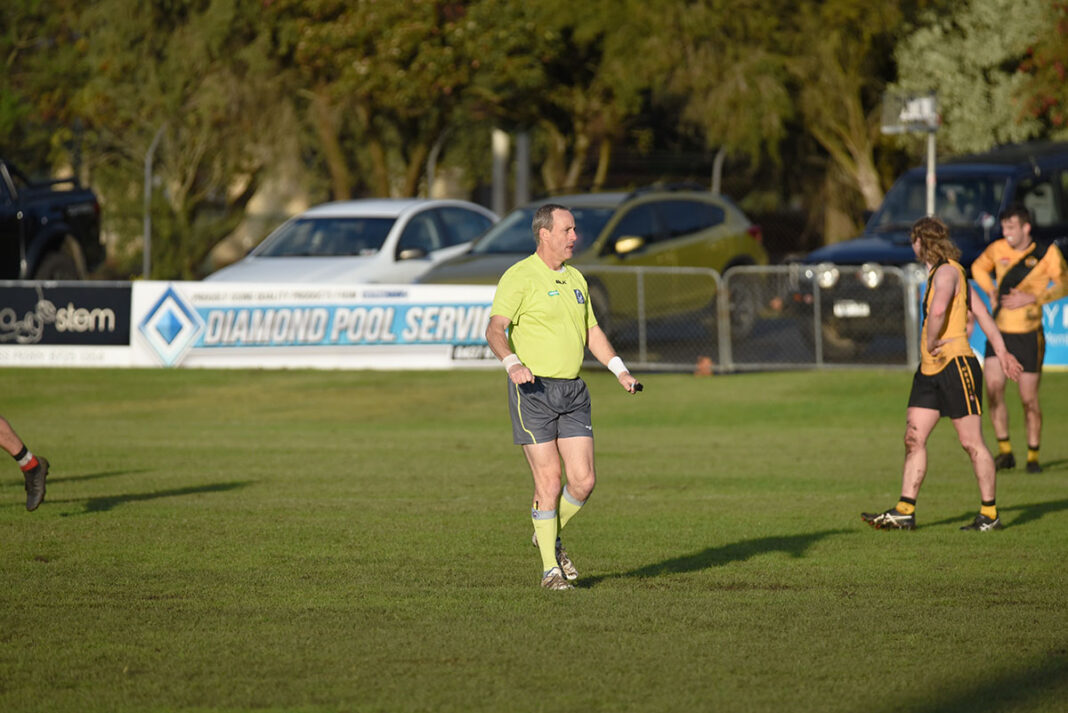 The 2022 Bendigo Bank Western Border Football League season might be thriving at the midway point of the season, but those who control the game are on life support.

Umpiring numbers around the region have been dramatically falling at an alarming rate over recent years.

At the start of the 2022 WBFL season, the total amount of officials was at an all-time low with club volunteers required to fulfil Under 14 and B Grade duties.

Despite the best efforts of many, numbers have continued to fall throughout the season for a variety of reasons and South East Football Umpires League coordinator David Carraill (pictured) has penned the following story in an SOS call to recruit more officials for the remainder of the 2022 season.

It was during my 18 year career as a reserves footballer at Glencoe (and one of the worst kicks of a footy to have ever played the game) that I saw an article on the back page of the newspaper that tweaked my interest in umpiring.

It was an SOS for umpires and until then I had played as most players do just taking for granted that umpires will always be there.

I was fortunate during my career to have not suffered any serious injuries so figured it was something I could do to keep me involved in the game afterward.

The Mid South Eastern Football League would have been my first choice, but at the time I did not have a vehicle suitable for travelling the distances of the league.

So I left it to lie, however the seed had been planted and word passed around and during the midpoint of season 2010 I received a phone call from Terry Willoughby out of nowhere asking if I’d be keen to umpire WBFL.

I will never forget doing my first Under 14 game being very green, struggling to blow my whistle and wondering why after each goal the boundary umpires were looking at me with an arm out.

I also remember at training during the midpoint of the next season getting a tap on the shoulder and thought ‘why are the reserves so late’ after hearing “2.30 this week mate”.

A Grade was something I had never set out to do and something you are never quite ready for.

Looking back, I realise the SOS I had read about then was a Sunday sail compared to the sinking Titanic we are now faced with.

Back then, we were still supplying umpires for the reserves and every A Grade umpire lost to the system meant the standard slipped.

Now, it brings us another step closer to the day that I will have to make a call to the league to say that we just cannot supply enough umpires for the weekend.

Looking forward the worry is how sustainable is it to have so many people over 50 performing multiple gigs on a weekend?

For some reason we are not able to attract recently retired footballers anymore.

One of the positives of the WBFL is that over the years we have been able to convert many of our young boundary umpires to field such as Taylor Fry, Carey Megaw and Ben Thiel to name a few.

Bright lights on the horizon include Emma MacDonald, who recruited from the women’s league and 14-year-olds Vaughn Stratford and Zac Shanks.

Shanks made his A Grade field debut recently in the North Gambier and Millicent game last round and I could not have been prouder of his outstanding performance.

But we still need more numbers, so If you would like to contribute to the game, make a few dollars, keep fit and mingle with a top bunch of people give me a call on 0400 599 366.

A quote received from a first year field umpire just last week resonated with me – “I just look at it like my boys don’t get to play if we don’t have umpires.”