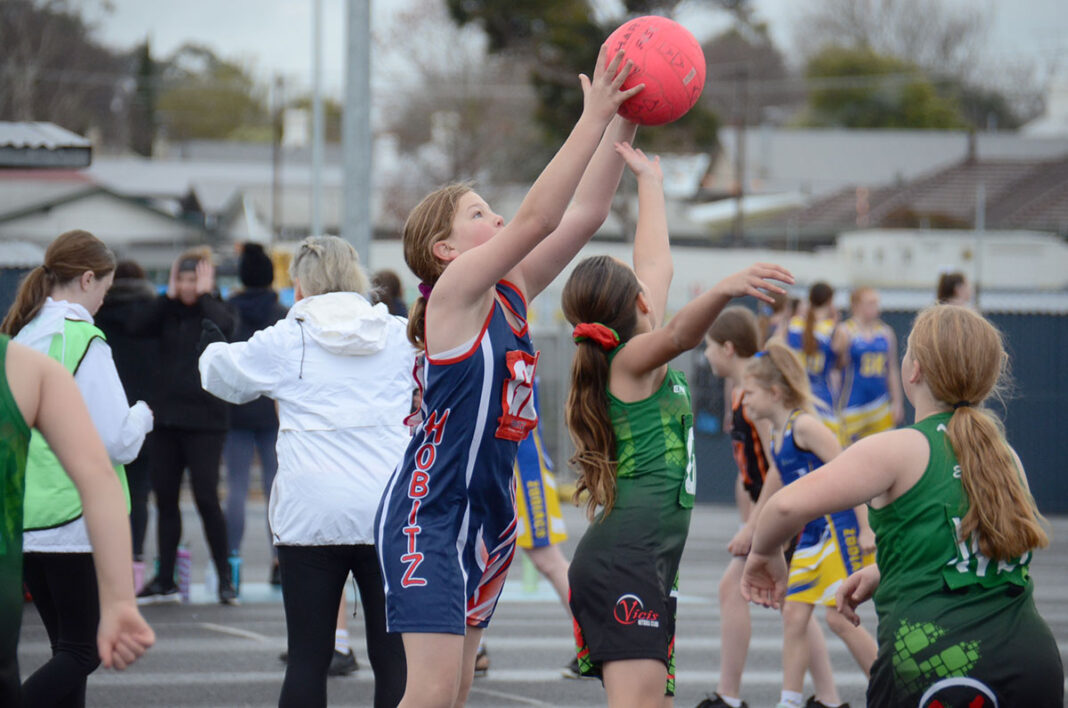 UNDER 13B HOBITZ VS VICIS

On the cold winter Saturday morning, the Vicis and Hobitz Under 13B teams were already on the move to start round 16 of the 2022 Mount Gambier Netball Association season.

In the first few minutes Vicis already proved themselves to be the dominant force in the match.

The first half consisted of many intercepts in the Hobitz third from the defence of Mylee Moore, Arabella Irkin, Milla Fullerton and Macie Bowering.

These players achieved many turnovers, while Hobitz goalkeeper Pippa McGwen had some good defensive moments.

While inside the Vicis third, their offensive team knew how to attack the ball and get it to the goals.

But the Hobitz team was not so far behind on their tails as they were fighting for the ball right next to them and having their fair share of leaps into the air to bring back down.

Vorwell almost never missed a shot from impressive distances, while the pocket-rocket of the match would have to be Ellie Day.

Day who plays in a usual position of wing attack was placed into the position of goal attack and with her small height, the Hobitz supporters were a little worried.

Day shot an impressive long distance shot into the goals which had the crowds roaring from both sides.

Moore showed spectacular sportsmanship on the court against Day being a fierce competitor and made sure to be careful with her smaller opponent.

The energy from the first half flowed right into the second as the Vicis still attacked well on the court.

The Hobitz defence was still solid, but the energy had completely died down by the fourth quarter.

A one-sided game finished with the scoreboard reading 34-2 Vicis way, but it did not define how good the contest was.

B1 INTRUDERS BLACK VS HOBITZ BLUE

By the afternoon, one would almost swear it was night-time at Olympic Park as Intruders Black and Hobitz Blue faced off under gloomy skies.

But the B1 battle was a fiery one as both sides pushed for glory.

Hobitz made their presence known on the court almost immediately from their goalies, Aimee Kilpatrick (goal shooter) and Sharni Jacques (goal attack) but then the intrusion happened.

Both teams were dominant on the court, but Intruders showed up.

Dakota Miller (goal shooter) would almost never miss and when she did, the rebounds would still be made to keep the Intruders Black’s score moving.

Taylor played well in the second half of the game scoring herself from many intercepts and was a quick runner on the court.

The second half consisted of an intense match and one could feel the tension off the court itself.

The competitiveness was consistent, but the sportsmanship remained.

In the end Intruders Black emerged on top 36-19, but this score was not a justification of this match at all.