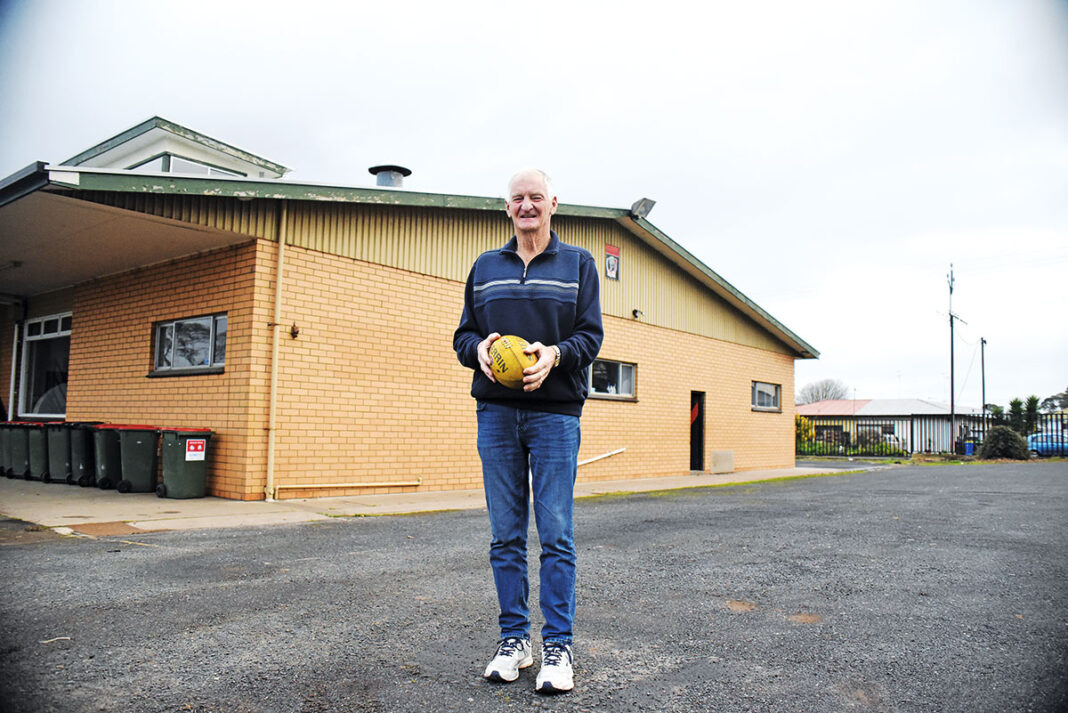 It might be a tough season for the current East Gambier A Grade side, but the club will be saluting its glory days in a mega reunion at McDonald Park during this weekend’s home clash with Millicent.

Living legends from the premiership sides of 1972, 73, 75, 76, 82 and 83 will be reuniting at the “Kennel” and sharing many fascinating stories from a golden period of Western Border football.

One of the most famous figures from the Bulldogs’ most successful era is premiership winning playing coach Gary Lazarus and he cannot wait to make a rare, but special appearance at his former club.

“When I come here to see family I see some of the boys, but those who have moved away have probably not seen each other for around 30 years.

“That will be the great part coming back as a club and it will be a good day.”

The WBFL was thriving in the seventies with many VFL and SANFL stars coming into the region including Lazarus himself.

Before he arrived at the “Kennel” the forward had become one of Fitzroy’s top players, being the struggling club’s leading goal kicker in four of his eight seasons with the highlight kicking four majors in the “Miracle Match” against Geelong in 1963.

Amazingly all this was achieved after Lazarus had overcome Polio, the infectious disease that paralyzed many kids during the middle of the 20th century.

Fortunately, he was able to recover from the disease and start playing football aged 13 and just four years later he found himself playing against the greats in the VFL.

By 1971 East was looking for a leader and the club approached retired Fitzroy coach Bill Stevens, but he knocked it back for family reasons and suggested Lazarus instead.

Despite the then 25-year-old having never coached a side before he jumped at the chance.

“I had only ever played footy, so went in blindfolded, but I just had to trust my ability,” he said.

“When I did the interview East was a very professional club with good people which made me feel comfortable.

“My first wife and I decided we liked the country area and there were some changes coming at Fitzroy which was not stable, so I thought the time was right and took the chance.”

The Fitzroy star had an immediate impact on the team, pushing the Bulldogs to the big dance in the first year, only to fall just short against West Gambier.

But the loss inspired a determined East team to a crushing grand final win over North Gambier and Lazarus said it was down to the club’s organic growth.

“I think we had finished sixth the year before (I arrived) and we lost around eight players, so I just backed the locals and young ones coming through,” he said.

“They fitted into senior football easily because they had good knowledge and I just had to implement what I wanted.

“We were runners-up in the first year which was pleasing and we were more driven in 1972 because of that.

“We played North Gambier who had lost five of their best players in the grand final, but they are always an unknown so they still put up a good fight.

“But we played to our plans and were too good and the win got the boys and the entire club really motivated to be successful.”

This win lit a fuse for the Bulldogs, who went on their most successful run ever winning four flags in five years.

A fast start pushed East to glory in a high-scoring 138-115 thriller against South Gambier in 1973, but this win was far from certain according to Lazarus.

“When you start off well sometimes a little bit of complacency comes,” he said.

“South started getting the ball out of the centre and we could not stop their run for a while.

“But we stepped up in the last quarter and everyone was on the same page to get the win.”

Back-to-back success followed in 1975 and 76, which cemented the club as a powerhouse.

“We were a hard team and had lots of height from full back to full forward,” Lazarus said.

“We started to attack from the half back line and through the centre where a lot of clubs used to sit back a bit.

“It was a big effort from everybody with Zig Golebiowski, Noel Doody, Peter Stringer, Tracy Braidwood and many others who gave us a great balance.”

After lifting four premiership cups, Lazarus gave up the coaching gig and continued on as a player until 1978.

He then spent two years as a playing coach for Millicent before hanging up the boots in 1980.

But the coaching bug bit him again just three years later as he returned to the top job at McDonald Park and enjoyed immediate success as a non-playing coach with the Bulldogs outscoring the Demons by 37 points after a 5-goal bag from Kevin Harris.

Another flag followed a year later when East edged out Lazarus’ former side the Saints then led by Richard Hill in a tight decider at Vansittart Park.

“The 1983 team was one of the easiest to coach because no one backed off and they all did the work,” Lazarus said.

“It was a local team that played a good brand of football and we were lucky to have Gorden Milosevic in the ruck, while Kevin Harris and Mick Wood were great rovers kicking 40 goals each.

“Them and other players like the Doody’s, Ransom’s and Dempsey’s all combined really well.”

Lazarus continued to coach for another two years before closing a historic chapter at East Gambier in 1985.

Despite Fitzroy trying to snatch him back at one point, the champion forward has nothing, but happy memories from his time in the WBFL, which he believed were the most productive of his career.

“I enjoyed my entire time there with every aspect of the club fantastic,” he said.

“At the end of 1976 Fitzroy asked me to come back to Melbourne and coach the reserves, but I did not go for family reasons which is the only regret I have in football because who knows where you could have ended up.

The stories from the five premiership sides will start flowing tomorrow night from 6pm at the club before they reconvene at 12pm on Saturday for the round 14 clash between East and Millicent.