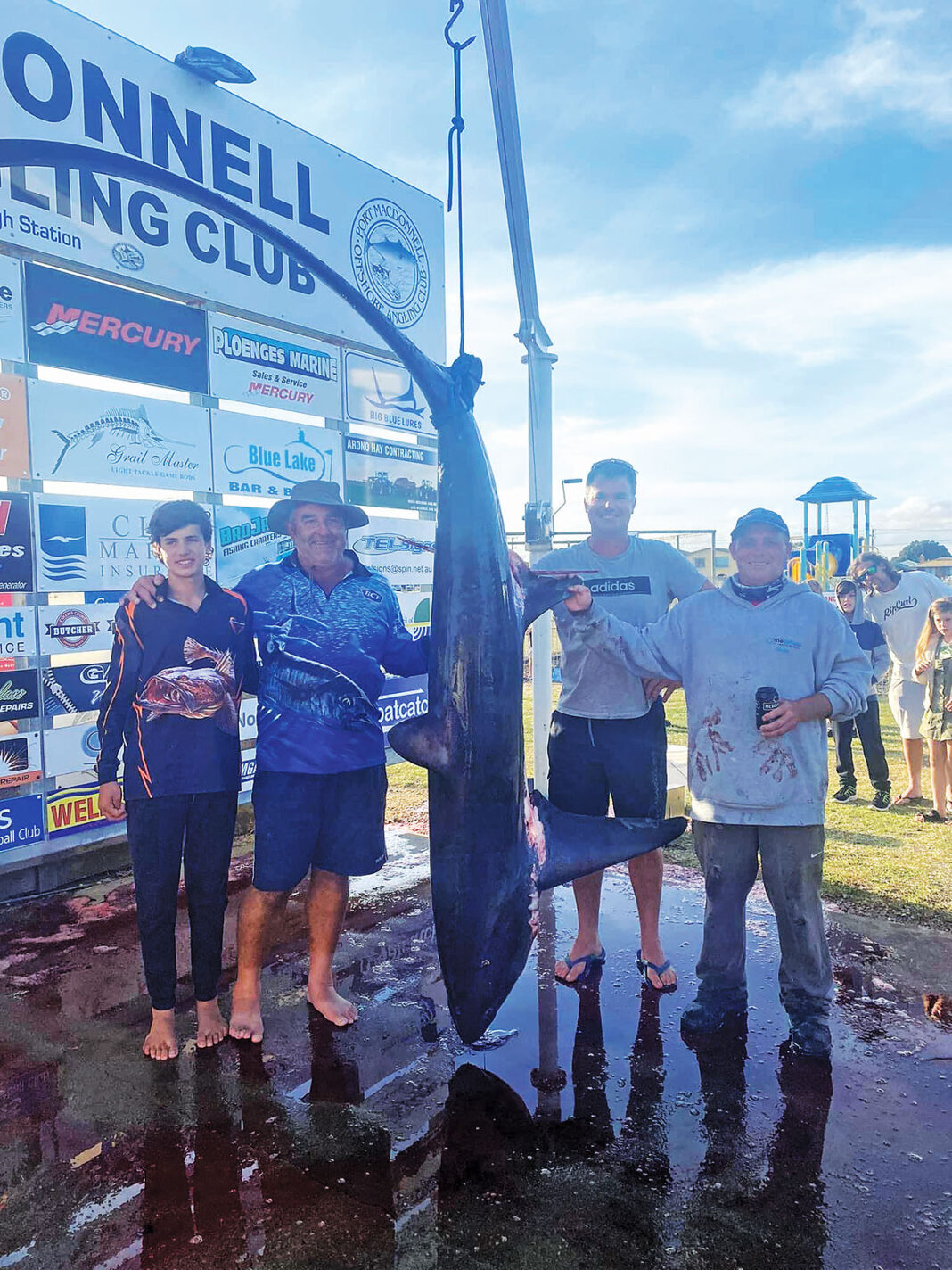 Fishos make most of summer

An amazing run of weather across the Limestone Coast was taken advantage of by lots of fishos this weekend.

There were boaties, surf fishos, inland and river people all getting in on the action and there were some pretty special fish caught.

The offshore conditions were about as good as they get down here.

The swell was down, the wind was down and the fish were hungry.

There was plenty of action for the offshore boaties across the weekend, and from 12 inches of water, through to half a kilometre deep, there was some very nice catches.

Starting out in the deeper water we saw plenty of boats make the journey to the shelf and they were not disappointed.

The hapuka did not really play the game for most, with only a hand full of smaller fish caught that I know about.

But there were plenty of blue eye, big gemfish and pink ling and on board the Sims Drilling crew’s brand spanking new big stabicraft boated themselves a cracking 152kg thresher shark which is unofficially the biggest one ever landed out of Port MacDonnell.

Not only are threshers an amazing fight, but they are also unreal on the table.

There have been some very nice gummy shark boated in the 55mt – 120mt depths this weekend, with some of those bigger fish nudging and even passing the 20kg mark.

The gummy shark were not the only ones on the chew, I also saw some nice flathead, knifejaw, red snapper, blue morwong and snapper all hit the deck too.

There is not a lot of tuna news from our local area, but the Portland Northshore is running red hot for not only the tuna, but kingfish as well.

Probably the biggest news to come from the weekend is local gun Andy Barton catching a land based tuna off the Portland Breakwater.

I have heard of a fair few kingfish caught from down there off the rocks, but I cannot ever remember a tuna being landed.

A small 15g gillies baitfish was the weapon of choice on a nice light combo, and after a hefty fight, Andy landed his fish.

It was a cracking effort and very well deserved.

The surf fishos across the South East and beyond are all gearing themselves up for the annual Kingston Lions Club Surf Fishing Competition which is to be held this weekend.

There have been crews coming through the shop who are heading up almost a week early to secure their favourite spot, but with over 70km of fishing beach, there should be plenty of room for everyone.

Registrations are available at Spot On Mount Gambier until 7pm tonight, otherwise the Lions Club tent will be set up in Kingston all weekend.

The lead up has been exciting with some very nice fish being caught.

Bronzies and gummy shark have been the most common through almost the entire length of the Coorong, but I have seen a few mulloway ranging in size from just legals to one lucky crew who managed to land themselves a cracker at 140cm.

As I put pen to paper, it’s looking like it could be a wet competition, with about 5mm – 10mm of rain forecast overnight, but it should be a warm night and reasonably light winds, so it will be fishable.

Locally over the weekend we saw a few nice fish beached from the Piccininni area, right through to Browns Beach.

The humble gummy shark filled the eskies of the lucky anglers who managed to find them, along with a few snapper and elephant shark mixed in.

There are also some nice salmon still cruising around down that way for fresh bait, and plenty of seven gillers and stingers to test the gear out too.

Heading further along the coast, there has been some great shark captures from in the Canunda NP.

Gummy and school shark have both copped a mention from fishos, and spread out from the old drain, through Whale and Channel Rocks and even up as far as Oil Rig Square.

We often see mulloway this time of year through those areas, so either no one has had such luck yet, or they are just keeping it to themselves.

The whiting fishos had to work for their fish over the weekend.

The calm seas have turned the water crystal clear and the whiting are not big fans of that.

The numbers were still impressive though, and most who targeted them did still manage to find a few.

Inside the Port MacDonnell breakwater, dawn and dusk were the prime times because the middle of the day was just too clean.

The land-based guys are still getting some nice fish at Nene Valley and Carpenter Rocks when the sun goes down, but the stir we have coming will definitely kick things back into gear.

Whiting fishos who are finding the water too clean and calm will often use the same gear to go and target sweep, which are normally in hard to reach places until the sea calms down nicely.

There has been some nice fish in that 800g – 1kg bracket caught over the weekend, so that’s always great to hear too.

Garfishing has been high on the list of jobs for anglers over the past few weeks, and be it with a rod and reel or a dab net and a spotlight because everyone has been in on the action.

The Port MacDonnell Breakwater has produced some rippers this week for both types of anglers, so that has been encouraging to see after a couple weeks of slow reports.

The other areas we chase gar such as Cape Douglas, Livingstons Bay and Pelican Point have all had a similar week, catch numbers are slowly getting better and better.

There are still some good numbers of squid coming from inside the Livingstons Bay while the water has been so clean, so that’s encouraging to hear as well.

The Port MacDonnell Jetty has been alive with fishos this week, everyone making the most of the warm still evenings before school goes back in a couple of weeks.

There are plenty of things to catch down there of an evening, with squid, tommy ruff, mackerel, trevally and salmon in good numbers, just to mention a few.

The best bet for baits still seems to be cockles and live gents, and the prawn style squid jags for your squidding.

The Glenelg River was abuzz with fishos, water skiiers and kayakers all hoping to make the most of the great weather.

I have not got an awful lot of fishing news to report, but there have been plenty of bream and estuary perch spread right throughout the river.

Anglers walking the banks of the extreme upper reaches between Casterton and Dartmoor have found some fabulous fishing on surface lures, soft plastics and even baits, while on the other end of the scale, the sand flats of the estuary around the rocks and drop-offs have been brilliant too.

The mulloway news has been a bit light on this week again, but there has been a few caught by locals trolling live mullet anywhere from the estuary up to Taylors Straight, but that’s about it.

There are fish on the sounder, we just need to flick their switch.

The weekend forecast looks like it will be a bit wet, but definitely a fishable one.

Good luck to all of those heading to Kingston for the fishing competition, and those just wetting a line anywhere else.

Tigers keen to take the challenge to rising Demons