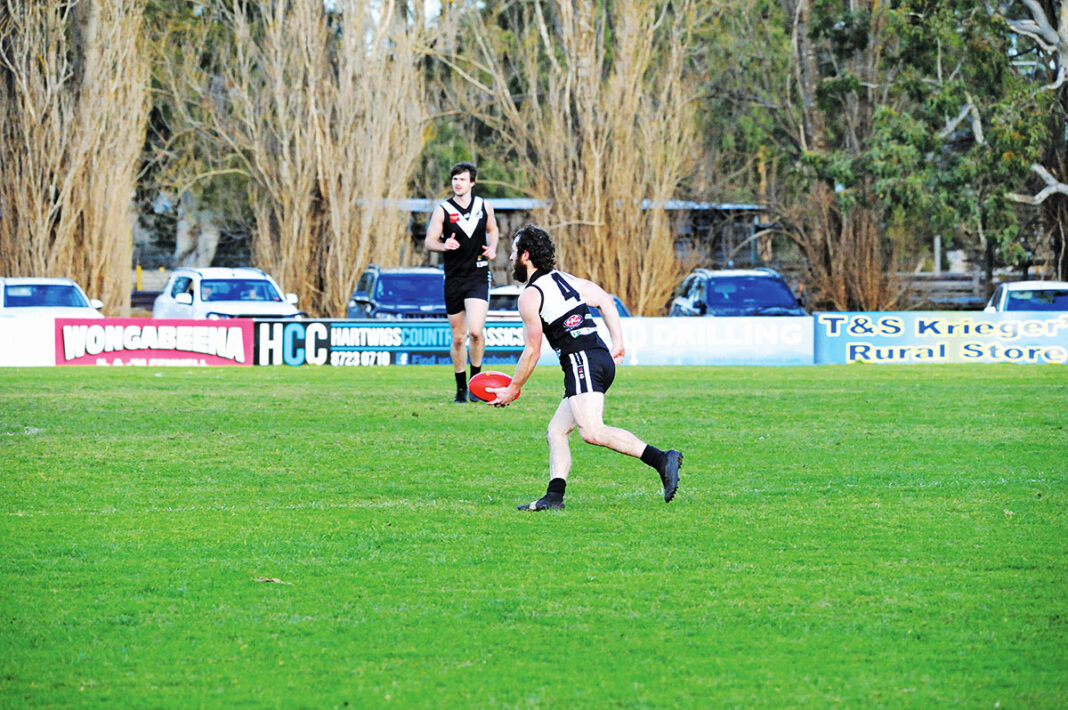 State champs face off at home

There will be the equivalent of one third of the winning 2022 South Australian Country Football Championships team on the oval when Kalangadoo hosts Mount Burr in round 14 of the Mid South Football League on Saturday.

Defender Sam Wallis was the sole Mozzie in the victorious line-up at Whyalla while there was a record five Magpies with Mitch Lowe, Tye McManus, Ben Gregory, Andrew Stone and Patrick Davies.

Given the proximity of the two timber towns as well as the impact on the composition of the top four, there should be a huge crowd at the Kalangadoo Soldiers Memorial Park.

Ladder leading Kalangadoo will come into the contest as warm favourite given its 119-point triumph in round five at Mick and Jean Walker Oval.

The win retained the Magpies the coveted Harry Bott Memorial Shield and was arguably the high point of their year to date.

The scores will be much closer in the return match with the Mozzies close to again choosing their best 18.

Needless to say, bragging rights are vital late in the home-and-away season with the finals commencing on August 27.

A win for the home team would make its hold on top spot even firmer.

On the other hand, Mount Burr is looking at finishing the minor round in any position from top down to fifth.

The average age of the Mount Burr team is one of the lowest in living memory and coach Reece Duncan is to be commended for getting his team within reach of its first major round campaign since 2018.

An upset Mozzie win is possible but unlikely.

The 2021 premiership hangover was still evident when Nangwarry hosted Port MacDonnell on May 7 with the Saints booting a commendable 14 goals and going down by less than three straight kicks.

The scoreboard alone suggested the Demons would need to improve markedly to have any realistic chance to make a first-ever successful premiership defence.

Since then, the Bay Boys have rebounded and risen to fourth place.

Nangwarry has since played inconsistently and allowed costly lapses in concentration in most games.

The two teams meet at the seaside with the two Thomson brothers on opposing sides.

Luke is coach of the Saints while Kevin is Simon Merrett’s assistant at the Bay.

It should be the latter who gets to win the club anthem at 5pm.

Glencoe will be looking for a hat-trick of wins when it hosts near-neighbours Tantanoola.

Successful outings against Nangwarry and Robe have removed the spectre of the first-ever wooden spoon for the Murphies.

The club has deemed this to be its annual premiership reunion day.

Among those present will be members of the club’s last A Grade premiership team which defeated Tantanoola in the 2007 grand final.

Back on May 7, the Tigers defeated the Murphies for the Neil Von Duve Memorial Shield.

However, the visitors will be the underdogs in the return match.

There are high stakes for Robe as it makes its annual journey to Kongorong as a loss would seriously dent its chances of finishing the minor round any higher than fifth.

The Roosters would be more than happy if they could replicate the outcome of the May 7 encounter at the seaside.

On that occasion, the home side cruised to a 36-point quarter time lead, never relaxed the pressure and was 46points clear by the final bell.

The Hawks have a large and loyal following and they will pack out the viewing shed in the hope the round five outcome will be reversed.